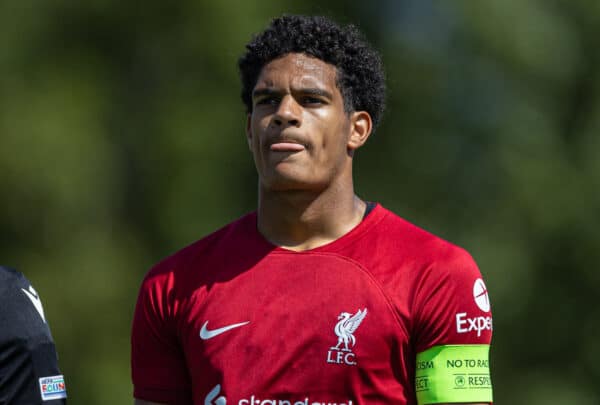 The return of another Liverpool under-21 centre-back has seen the Reds allow Jarell Quansah to leave on a temporary basis, with the 19-year-old joining Bristol Rovers until the end of the season.

The deal was announced on Friday afternoon, with Quansah taking the No.5 shirt for Joey Barton’s side. He is believed to have been registered in time to face Wycombe Wanderers this weekend.

He leaves Liverpool having featured heavily for the U21s this season, and for the U19s in the UEFA Youth League.

The loan move was sanctioned after fellow defender Billy Koumetio was recalled from his loan spell at Austria Wien, with academy staff now feeling that Quansah will benefit from the experience of first team football.

“I can’t wait to get started at Rovers,” he told the club’s official website after the deal was announced.

“I’d known of the club’s interest in me for a little while and I’m looking forward to meeting all the lads and showing everyone what I can do.”

Having been with the Reds since the age of five, Quansah was part of the first team squad that made the trip to Dubai for a mid-season training camp at the end of last year.

He has captained the club at various age groups and played a key role in England U20s World Cup triumph last summer.

Quansah has trained with Klopp’s side on numerous occasions at the AXA Training Centre this season, providing cover when injuries to first team defenders have occurred.

But with Koumetio now able to provide that cover again, and with Liverpool’s senior defenders ahead of Quansah in the pecking order, the Warrington-born defender has been allowed to leave on loan.

He joins a Bristol Rovers side who are currently ninth in League One, with three points between them and the play-off positions.

Conor Bradley and Owen Beck, who know Quansah well from their time together in the academy, are also both on loan in League One with Bolton Wanderers.