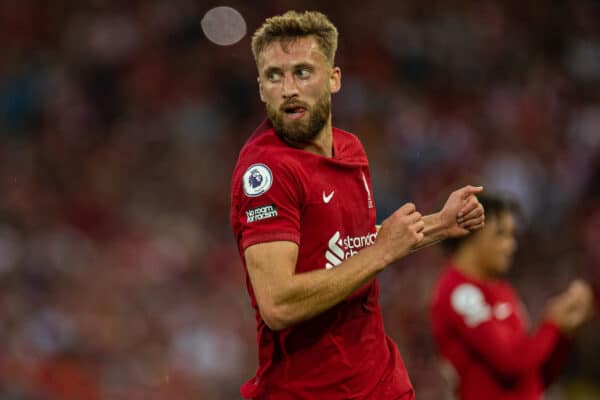 Nat Phillips has once again found himself as a steady fifth-choice centre-back for Jurgen Klopp, but a January exit could be on the cards with Liverpool expecting offers.

The 25-year-old has consistently been linked with a move every six months but for one reason or another, an obstacle emerges to keep him at Anfield.

He sits behind Virgil van Dijk, Ibrahima Konate, Joel Matip and Joe Gomez in the pecking order but acts as a dependable option should the need arise.

Phillips has been ever the professional at the cost of his own minutes on the pitch, featuring for 229 minutes this season in addition to 20 games as an unused substitute.

But according to the Echo‘s Ian Doyle, Phillips could find a route to regular first-team action with the return of Rhys Williams from his loan spell at Blackpool.

The Reds are to recall Williams early after playing just 15 minutes since Christmas, but Doyle states that the club “have been happy with the first-team experience gained.”

But how does this help Phillips?

It will see Williams take over as the fifth-choice centre-back and allow Phillips to make a January switch – a scenario that has precedent with the same set of circumstances unfolding last season.

Williams was recalled from Swansea last January and Phillips was then allowed to join Bournemouth on loan to assist in their promotion to the Premier League.

Despite limited opportunities to put himself in the shop window, Phillips is said to be “of interest to a number of clubs,” with Liverpool expecting offers before the January transfer deadline.

The Athletic’s James Pearce says the club are “prepared to listen to both loan and permanent offers” for the 25-year-old, who attracted interest from the likes of Bournemouth, Burnley, Southampton and Benfica last summer.