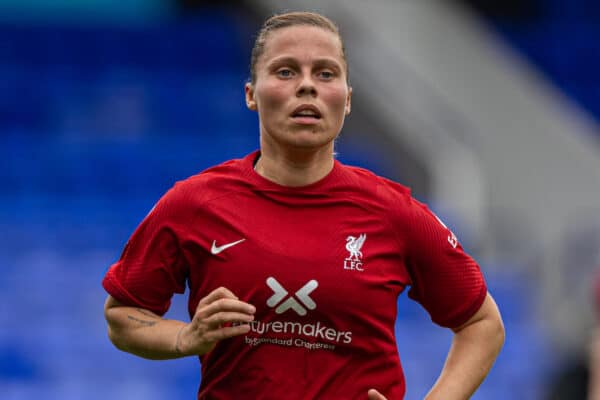 Liverpool FC Women centre-back Gilly Flaherty has confirmed her retirement at the age of 31, explaining the sad passing of her father as the reason.

Flaherty joined Liverpool from West Ham last summer and went on to make 10 appearances for the club, including a record-breaking 176th outing in the Women’s Super League.

The centre-back, formerly of Arsenal and Chelsea, now holds the record for the most outings in the English top flight, surpassing Jill Scott’s tally.

But Flaherty has now called her career to an end, with the death of her father over the festive period leaving her “heartbroken” as she said: “I don’t want to carry on [playing] without him by my side.”

“I’ve taken the decision to retire from professional football,” her statement on the club’s official website reads.

“It isn’t a decision I’ve taken lightly but one I’ve reached after speaking with those closest to me.

“Losing my dad just before Christmas has left me heartbroken – for 22 years we shared our love of football and playing-wise I don’t want to carry on without him by my side.

“Playing-wise, I know the right decision is for me to call it a day.

“The time is right for me to be around my family and to be nearest to those closest to me.”

She added: “I want to thank Liverpool, especially Beardy and Russ [Fraser, managing director] for bringing me to the club.

“I’d also like to thank the Liverpool fans for supporting me and taking me in.

“Even though it has not been a finished journey I’d like to think the fans saw commitment and dedication to the badge from me and I gave 110 percent in every game.

“I also wish to thank the players for being there for me throughout my time at the club and I wish them nothing but success for the rest of the season.”

Manager Matt Beard had previously worked with Flaherty at West Ham, and reflected on a “wonderful career” for the Londoner.

“She’s achieved everything there is to achieve in the domestic game,” he said.