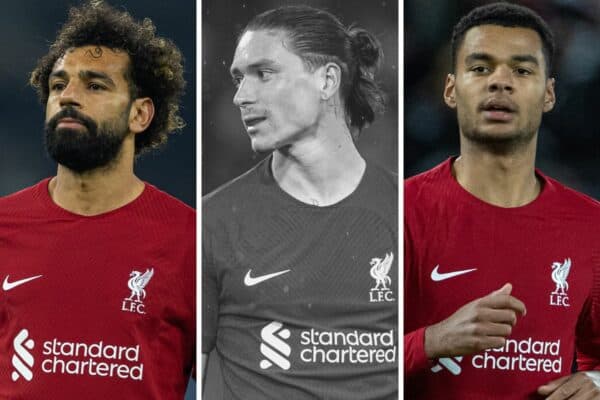 Liverpool lineups vs. Brighton: Who leads the line without Darwin Nunez?

With Darwin Nunez expected to miss Liverpool’s trip to Brighton, choosing a player to lead the line looks set to be the biggest call Jurgen Klopp faces when selecting a lineup on Saturday.

On Thursday, news emerged that the Uruguayan had missed a number of training sessions this week and was a doubt to face Roberto De Zerbi’s side.

Klopp confirmed as much in his pre-match press conference on Friday, and was seemingly reluctant to place a time frame on his return.

So as Liverpool prepare to face an in form Brighton team this weekend, how could the Reds line up?

From Klopp’s pre-match press conference on Friday, we know the following:

With Virgil van Dijk also still sidelined, Liverpool look unlikely to move away from the back four that faced Wolves last weekend, while Fabinho, Jordan Henderson and Thiago could continue in midfield.

But with no Nunez, Firmino or Jota, Klopp will have to use a makeshift option in attack, with Salah and Gakpo the likeliest contenders.

Salah might be the most favourable option, in order to allow Gakpo more time to acclimatise in his preferred left-sided position, with Alex Oxlade-Chamberlain coming back into the XI.

Here’s how the Reds could line up with Salah in a central position.

If that’s the change Klopp goes with, this would be the Liverpool XI:

One player who could be in the frame for a start is Naby Keita, who has certainly been one of Liverpool’s better performers when introduced off the bench in recent weeks. If he was to play, Henderson would perhaps be likeliest to make way.

Much was made of Gakpo’s versatility when he arrived from PSV at the start of the month, and it may be that Klopp is happy to use him in a central role at the Amex on Saturday.

If that’s what the Liverpool boss decides on, the team could look like this:

That would see Liverpool line up as below:

Harvey Elliott and Fabio Carvalho will also be in contention to feature, but given Oxlade-Chamberlain’s goal and encouraging performance against Brentford, he is surely likeliest to replace Nunez.

After another underwhelming performance against Wolves, Liverpool travel to the south coast knowing that above all else, they need to find a way to grind out three points on Saturday.

That, against a Brighton side who are going from strength to strength under Roberto De Zerbi, looks a huge task, and certainly isn’t made any easier by an ever growing injury list.