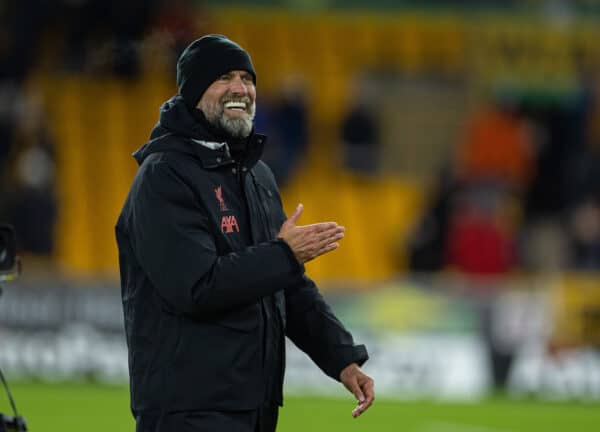 Saturday’s meeting between Liverpool and Chelsea will bring up a big landmark for Jurgen Klopp, with the Reds looking to register their first Premier League win of 2023.

This will be the 1,000th match of Jurgen Klopp’s managerial career.

The player to have played the most matches in Klopp’s first 999 games is Roberto Firmino, with 341 appearances.

While the player with the most goals is Mohamed Salah, with 173.

Liverpool’s next goal will be the 850th during the tenure of Klopp in all competitions.

Liverpool have suffered defeat in the opening two league matches of a calendar year for the first time since 1993. Not since 1953 have they lost the first three.

The Reds have won all 12 games this season in all competitions when they have scored the game’s first goal.

In the Premier League, they have won all of the last 18 matches when netting the first goal since a 2-2 draw at Chelsea just over a year ago.

Liverpool are one of only two teams yet to be awarded a Premier League penalty this season – Bournemouth the other.

The Reds were last awarded a top-flight penalty in April 2022, with Fabinho scoring from the spot in the 2-0 home victory over Watford.

Salah is aiming to become the first Reds player since Ian Rush in October 1990 to net against the Blues in three successive league meetings.

The Egyptian played for Chelsea 19 times, scoring twice. Both goals and 13 of the appearances came in the Premier League.

Harvey Elliott’s next appearance will be his 50th for the club in league and cup. He is the only Liverpool player to have appeared in all 29 of Liverpool’s games this season.

Chelsea are the only team that Trent Alexander-Arnold has scored against in more than one game – being on the winning side in September 2019 (2-1) and in the return at Anfield (5-3) in July 2020.

Liverpool and Chelsea played each other four times last season with both league encounters ending in a draw. They also met in the Carabao Cup and FA Cup finals at Wembley with Liverpool winning both on penalties after a goalless draw.

Never before in history has there been three league draws in succession between the clubs.

Four of the last seven league meetings at Anfield have finished all-square.

In the Premier League the Reds have won 23 of the 60 encounters, with Chelsea winning 21. At Anfield Liverpool have won 15, drawn eight and lost seven.

Only once in 79 league meetings has there been a goalless draw – at Anfield in October 1971.

Chelsea aiming to bring 100 up at Anfield

The Blues next goal will be their 100th scored at Anfield in all competitions. They have failed to score in only one of their last 11 league visits.

They have lost seven league games this season so far – one more than they lost in the whole of last season.

On the road this season they have conceded 14 times away from home in the top-flight. In the whole of the 2021-22 season they conceded 11.

Chelsea have won two of the last 12 domestic league and cup matches – home wins over Bournemouth a couple of days after Christmas (2-0), and the 1-0 victory against Crystal Palace last Sunday.

The Londoners are winless in six successive away games in all competitions for the first time since September – November 2015 under Jose Mourinho.

The Blues have not won any of the seven league games this season against teams above them in the table, drawing three and losing four.

Graham Potter has faced Liverpool as a manager six times in total, winning once. The sole victory came at an empty Anfield in 2021.

Michael Oliver is to take charge of a match between these teams for the sixth time in his career.

Of the previous five, the Reds have won two, drawn two and lost one.