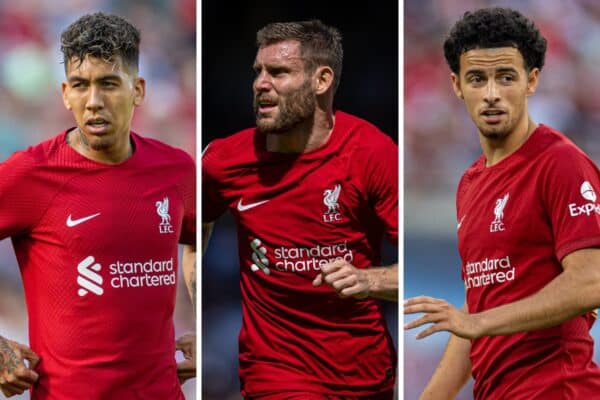 As Liverpool head to Brentford for their first game of 2023, Jurgen Klopp has given positive news on three players previously out due to injury.

The Reds kick off at the Gtech Community Stadium on Monday evening, looking to make it five wins in a row in the Premier League.

It has been a recurring theme for Klopp’s side so far this campaign, but the hope is that, despite knocks for Andy Robertson and Harvey Elliott at the weekend, injury issues are easing.

That would appear to be the case when it comes to Roberto Firmino, James Milner and Curtis Jones, with Klopp claiming they have “a chance” of being involved at Brentford.

Meanwhile, Ibrahima Konate could be in contention to start having made the substitutes’ bench for the 2-1 win over Leicester.

“Bobby and Milly, we have to see [at the weekend], but there’s a chance,” Klopp told reporters in his pre-match press conference, which was held at Anfield on Friday.

“Ibou has a good chance. We have other players who are not available, but they are not close enough [to update on].

“Curtis is now in full training so, I’m not sure, maybe for the squad, we have to see.”

Klopp’s comments would suggest that Firmino and Milner will at least be on the bench, with a chance for Jones to continue his reintegration, too.

It will go down to the wire when it comes to whether new signing Cody Gakpo will receive clearance to feature, with the manager none the wiser when asked on Friday.

“If I would work for the decisive agencies, or sit in the decisive offices, then I’m awake early every morning so I could sign these papers at 6.30am,” he joked.

“On top of that, he’s not allowed to train with the team before these papers are signed.

“Technically he’s still an Eindhoven player for I’m not sure [how long], but he’s not allowed.

“There is a chance on my planet, but I don’t know if it’s really there.”