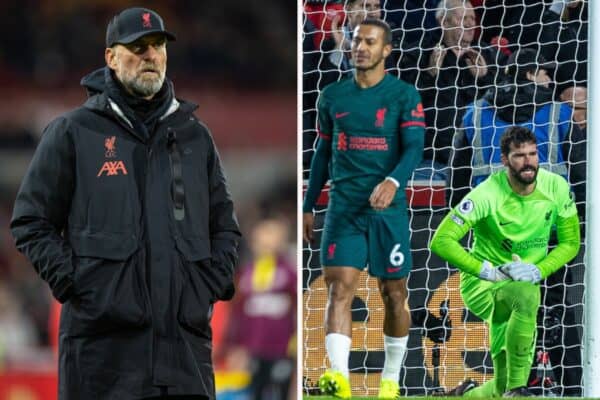 Liverpool’s start to 2023 began in the worst possible fashion after a 3-1 defeat to Brentford on Monday, and a hugely worrying statistic emerged after the game.

Jurgen Klopp‘s side had a number of opportunities to take the lead early on, but soon began to show their frailties at the other end of the pitch.

Brentford were without talisman Ivan Toney in attack, but were still able to bully a Liverpool backline that were in disarray throughout.

An Ibrahima Konate own goal put Thomas Frank’s side in front, before Yoane Wissa doubled their lead before the break. Alex Oxlade-Chamberlain halved the deficit early in the second half, only for Bryan Mbuemo to secure the points for the home side late on.

In the aftermath of the defeat, a remarkable stat summarising the extent of Liverpool’s defensive problems surfaced on social media.

According to Opta, Liverpool have now conceded 51 big chances in their 17 Premier League games this season.

That amount is more than twice as many as Arsenal, Man City, Newcastle, Man United and Tottenham, the five teams above them in the Premier League table.

When you take that into consideration, it’s no wonder Liverpool simply haven’t been able to keep pace with their rivals towards the top of the table this season.

The Reds haven’t kept a clean sheet in seven league games and have conceded first in 50% of games this season, a record that simply isn’t sustainable for a team with aspirations to be winning titles.

There was also a telling quote from Brentford boss Thomas Frank in his post-match press conference, with teams continuing to exploit Liverpool’s high defensive line.

“We knew the counter-attacks were a key thing and that we would have a big opportunity to get in behind them because they have such a high line – I think the boys did that very well,” he told reporters.

Klopp and his coaching staff have always insisted that Liverpool will not move away from their bold starting positions, but if the Reds are to achieve anything this season, you have to question whether a change in approach is required.

In attack, despite his hard-working performances, Darwin Nunez continues to struggle in front of goal. The statistics show he has missed more big chances (15) than any other player in the Premier League this season, with Liverpool missing 39 in total.

Many will point towards the fact he is getting into so many goalscoring positions, with Man City the only team in the league to create more big chances (50) than Liverpool (47) this season.

However, with a host of Liverpool’s attacking players still absent, and the Reds playing catch up in the race for Champions League football, it’s imperative that Nunez’s conversion rate improves between now and the end of the season.