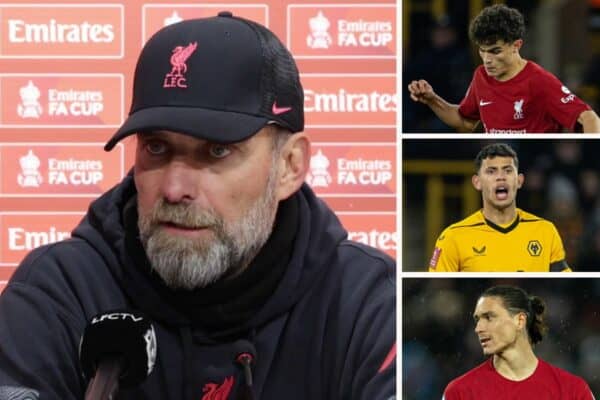 Speaking after Liverpool’s 1-0 FA Cup win at Wolves, Jurgen Klopp discussed an impressive performance from Stefan Bajcetic, name-dropped two Wolves players who have been linked with the Reds, and provided a fitness update on Darwin Nunez.

Here are the key points from Klopp’s post-Wolves conference…

Was this the night Bajcetic came of age as a Liverpool first team player?

Klopp was clearly impressed by the 18-year-old’s performance, and had some nice things to say about fellow midfielders Thiago and Naby Keita, too.

“He’s a good boy, a good player, very smart in his movements…,” the boss said on Bajcetic’s performance.

“Having Thiago next to him is pretty helpful, I think. Thiago is talking a lot on the pitch, and Naby was really there tonight, which is obviously very helpful.”

Wolves, of course, have two midfielders who are reported to be of interest to Liverpool.

Ruben Neves has been linked with a January move to Anfield in some quarters, while Matheus Nunes is believed to be a target for the summer window.

“In the moment when you have Neves in the game, it changes everything, pretty much,” Klopp said.

“And then when Nunes is on the pitch as well, it’s twice as difficult.”

Rather bizarrely, one journalist took the opportunity to ask Klopp a question he’s answered more than once in recent weeks.

Before the game, Sky Germany’s Florian Plettenberg again reported that Firmino is keen on extending his Liverpool contract.

And when asked whether he wanted to keep the Brazilian at the club, Klopp gave the same response as always:

“I said that before. Yes, I want to keep him at the club of course.”

Nunez to return vs. Chelsea?

Some good news on the injury front? Perhaps.

The boss says he hopes Darwin Nunez will be able to return to training in the coming days, which should give him a chance of featuring against Chelsea on Saturday.

When asked if anyone that impressed against Wolves had “played their way into his thinking” for the weekend, Klopp said:

“I don’t think it would be right if after one game I said ‘that’s the team for the next eight weeks’, or whatever. Let’s have a look.

“I hope Darwin is coming back to training tomorrow or Thursday, he might be then in contention of course.”