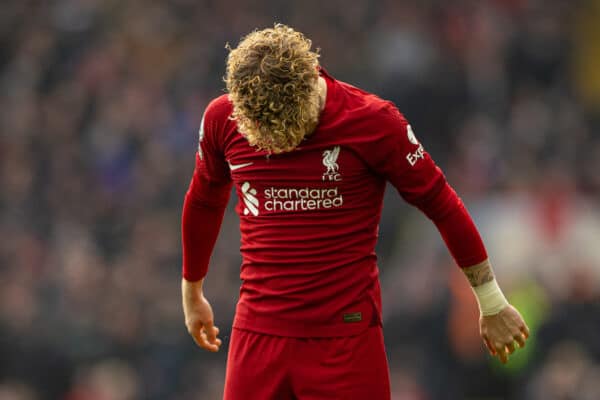 A 0-0 draw between two midtable Premier League teams was played out in a game that was very midtable in quality.

Not much to shout about

Previous incarnations of Liverpool would have fans on edge and entertained throughout the game with their high-pressing, high-line, high-intensity play.

Current Liverpool have gone for something safer, and in their attempts to be more compact and difficult to break down, they have sacrificed some of that edge-of-the-seat excitement.

This is no longer heavy metal football. Though there were occasional passages of quick passing, Liverpool also struggle to be a team who breaks an opposition through possession of the ball.

There was a noticeable change at the start of the second half. The first ten minutes of that period were played in Chelsea‘s half in front of the Kop, but they soon retreated into a lower block once the visitors recovered some possession.

Without the pressing, and with little probing possession, Jurgen Klopp‘s team are not really recognisable as the old Liverpool, and that can make for a less entertaining game as a result.

Hopefully, once they get out of this rut they can start releasing the heavy metal again.

Klopp went with a lineup that raised a few eyebrows before the start of the game, keeping faith with a number of players who took part in the midweek FA Cup replay victory against Wolves.

Harvey Elliott was used in an unfamiliar position on the left, while Mohamed Salah and Cody Gakpo could also have been more effective in different positions (Gakpo left, Salah central, and Elliott right).

This also meant the bench was reasonably strong, with Darwin Nunez and Trent Alexander-Arnold both capable of changing a game.

Nunez came on with an hour played, and Alexander-Arnold ten minutes later. The former made Gakpo look more dangerous and offered more pace to the attack but none of the subs, on either side, could ultimately make a difference.

It wasn’t always the most convincing display from Liverpool’s midfield as a trio, but there were flashes of individual quality from each of Thiago, Stefan Bajcetic, and Naby Keita.

Given the inconsistent performances of Jordan Henderson and Fabinho of late, these players more than deserve their place in the team.

There would be an argument for Fabinho coming in to offer some height but at the moment they are not losing much by having the Brazilian and the captain on the bench.

Is the three of Bajcetic, Keita, and Thiago Liverpool’s best midfield at this time? Probably.

Regardless, the young Bajcetic has certainly shown he is one of the best-performing midfielders at the club currently and given his selection for such a big game, Klopp seems to agree.

The manager said of the 18-year-old before the game: “He deserves it. He’s made massive steps with us. Imagine if I didn’t play him today.

“What would a footballer have to do to play? It was clear.”

Gakpo fails to take his chance(s)

Liverpool’s new signing had a few opportunities to get shots on target but, demonstrating some tension and impatience, snatched at his chances.

The first looked like a good chance as Salah played a ball back into the area from out wide. Gakpo got his body shape all wrong, leaning back and skying his shot into the stands.

It would be unfair to call his second shot a good chance, but nevertheless, his execution of a shot from outside the area can still be judged. He had time to line the shot up and blasted it into the Anfield Road end.

Though they were deemed good chances, Infogol gave these shots an xG of 0.05 and 0.04 respectively.

A header in the second half where he failed to let the ball drop to a more advantageous position was header predictably over, but later turn and shot was promising.

The power he gets in the shots is encouraging. A bit more composure and consideration of his technique and these shots could trouble goalkeepers from wherever they’re hit.

These two teams will both be looking towards big Champions League ties next month, but given their current positions in the table they may not be in the competition next season.

This was billed as more than the midtable battle it is in reality, due to the size and reputation of the two teams, but it was ultimately a scrappy, midtable affair.

None of the starting midfielders registered a pass success of more than 85%, not even the technically proficient Thiago and Jorginho.

The wind didn’t help, but this match still lacked quality and was a clear indication of the current standing of these teams in the Premier League, and that it is not a false one.