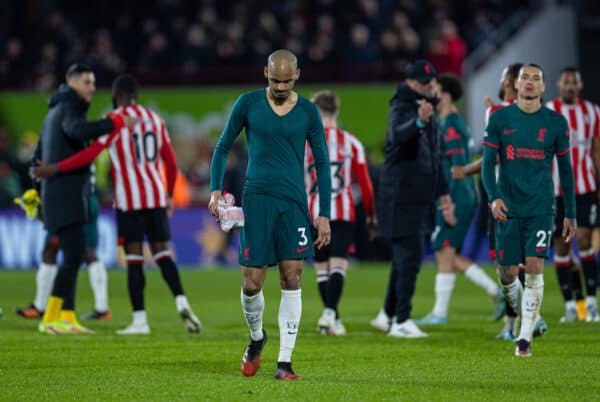 As Liverpool risk a rapid decline under Jurgen Klopp, one opposition coach has highlighted three key weaknesses – including one alarming reality.

The Reds passed up a big opportunity on Monday as they fell to a 3-1 defeat to Brentford, after the likes of Tottenham, Chelsea, Newcastle and Man City all slipped up at the weekend.

It ended a four-game winning run in the Premier League and, following Spurs’ 4-0 dismantling of Crystal Palace on Wednesday, leaves them five points off fifth and seven off the top four.

Liverpool’s performance in west London was particularly worrying, and though it is not yet a lost cause for Klopp’s side, there are certainly questions to be asked.

In an article for the i this week, Mark Douglas brought word from an unnamed member of the backroom staff of a club who recently took on the Reds.

“They’re in transition. It feels like a team that has been together a little too long,” they explained, before detailing the weaknesses identified in a pre-match meeting.

Those, according to Douglas, were:

The latter point is clearly the most damning, and was flagged by Jamie Carragher in a brutal post-match assessment on Monday that compared Klopp’s side to the latter era of Arsene Wenger’s Arsenal.

While it is uncertain which club Douglas is referring to, as Northern football correspondent for the i it is most likely that the source came from either Man City or Leeds.

Leeds inflicted Liverpool’s last defeat before their loss at Brentford, while Man City were victors in the Carabao Cup fourth round following the World Cup break.

The lack of physicality in Klopp’s side is a major concern, and one that will be difficult to address while the manager fields the same players on a weekly basis.

“When I watch Liverpool now, and certainly in midfield, it feels like Jurgen Klopp‘s team is morphing into something else – a technical team,” Carragher explained on Sky Sports.

“The only team that it reminds me of is when I used to play against Arsenal under Arsene Wenger.

“Yes, they were a great footballing team, but their actual pace and physicality, teams couldn’t cope with.

“Then that team morphed into something really technical and it never won again.”

Douglas’ report mentions interest in Atalanta midfielder Teun Koopmeiners, with at least one new addition required – and ideally, that would come this January.