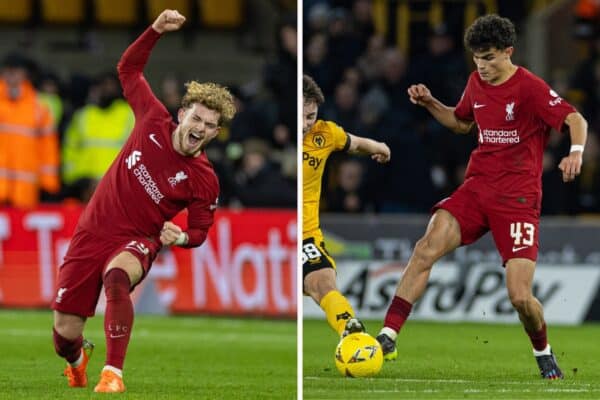 Stefan Bajcetic the “maestro” was shown plenty of love after his composed performance at Wolves as Liverpool welcomed a “massive win,” one that was desperately needed.

The difference a few days and eight changes can make, eh?

Jurgen Klopp cut a forlorn figure at Brighton but the smile was back as his side secured a 1-0 win at Wolves to move to the next round of the FA Cup.

There was an energy and spark to the Reds that has been absent far too often, ensuring Wolves had only two shots on target – an improvement on the nine from Brighton over the weekend.

It left Caoimhin Kelleher with a more than manageable workload and it was a testament to Liverpool being “compact and hard to break down.”

“Our whole team shape was really good, really strong. We didn’t have many shots or chances conceded so I thought our shape, in general, was really good,” Kelleher told LFCTV.

“[Klopp] the last few days just said get back to basics, doing the easy things and doing them right. Make sure we’re compact and hard to break down and we showed we’re capable of doing that.”

Harvey Elliott‘s long-distance strike proved enough to set up a date with Brighton in the fourth round, and he, along with Bajcetic, were two clear standouts on the night.

The pair were shown plenty of love in their comments as they took to social media to celebrate the victory, with “class” and “maestro” just two words used to describe Bajcetic’s game by his teammates:

James Milner was happy to mark his return after five games out with a “gritty team win,” and Elliott was shown plenty of love too:

A win always brings about more social media interaction and the Reds certainly enjoyed their first triumph of 2023, but focus is already shifting to the “big game at the weekend:”

There will be no getting carried away with events at Molineux but it is certainly a step in the right direction for Klopp’s side. Hopefully, the first of many.

And the next chance to take one of those steps is against Chelsea in the early Saturday kickoff – 9th vs. 10th.