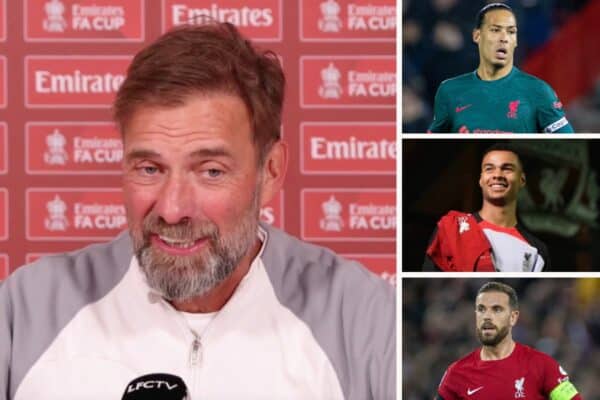 “More than a month” without Van Dijk

Earlier this week it was reported that Van Dijk was set for a spell on the sidelines with a hamstring injury.

Klopp confirmed those stories, and said the club would likely be without the Dutchman for “more than a month.” The last thing Liverpool needed.

“In the end the diagnosis was pretty harsh: weeks, more than a month,” he said.

“We talk about weeks, more than a month.

“It’s hamstring. We did nothing different. It was one sprint too much, in that moment.”

Gakpo “a joy to watch”

Cody Gakpo is expected to make his Liverpool debut on Saturday, after the formalities of his transfer from PSV were completed earlier this week.

In a tough period for Liverpool, Klopp says he’s enjoyed watching Gakpo in his first two days of training with the club.

“Cody has been in for two full training days and is a joy to watch to be honest,” he added.

“In our situation, it’s really nice to have a player who is pretty natural in a lot of things and knows where the goal is, that’s helpful.”

“Good in small spaces. Likes to shoot from distance, good finisher and dribbler.”

In the last two seasons, the FA scrapped replays in the third and fourth rounds to avoid any further fixture congestion, but things are back to normal this year.

Should Saturday’s match end all square, a replay will be played at Molineux in the coming weeks.

“Yes, I have been always,” Klopp said when asked if he would be in favour of replays being removed from the competition for good.

“There must be another solution,” he added when asked about smaller clubs getting more money from replays.

“We can’t solve all the problems by playing more games.”

Klopp seemed to suggest that Jordan Henderson would be the only player ready to return from injury this weekend.

The Liverpool captain missed the defeat at Brentford due to concussion, but has been able to train in recent days.

That would imply that Roberto Firmino and James Milner remain out, while Naby Keita was also not involved in Thursday’s session at the AXA Training Centre.

Klopp also said he would name a strong side at Anfield on Saturday.

“It was always clear we will line up as strong and as experienced as we can,” he said, with Liverpool playing one game a week throughout January as things stand.

“With Monday-Saturday, there will not be rotation because of the competition or whatever.”

“It’s a general problem, not a midfield problem”

Plenty believe Liverpool’s recent struggles stem from a lack of quality in midfield, but Klopp doesn’t agree, at least publicly!

“It’s a general problem, not a midfield problem,” he said.

“Defending starts up front, if we don’t do it then the midfield has no chance.

“The way we want to defend is clear. It works out most the time but not always.”