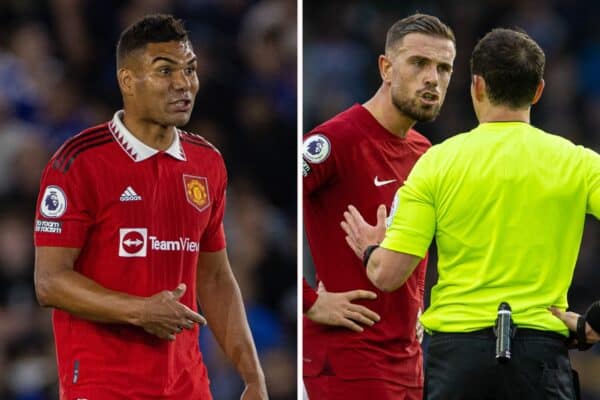 Casemiro became the latest Premier League player to earn a one-match suspension with his fifth yellow card, but there is no danger for Liverpool.

The Man United midfielder was cautioned for a cynical challenge on Wilfred Zaha in Wednesday night’s 1-1 draw with Crystal Palace, ruling him out of their trip to Arsenal.

It was the Brazilian’s fifth yellow card in the Premier League, which means he will be required to sit out one game per the rules of the English top flight.

He follows 23 others in missing at least one game due to the totting up of yellow cards in the first half of the season, with Ruben Neves (seven) cautioned more than any other player.

But Jurgen Klopp has no concern over any of his squad picking up a one-match suspension, as Liverpool will play their 19th league game on Saturday.

When Chelsea visit Anfield for their lunchtime kickoff, the Reds will officially hit the halfway point in the Premier League.

Premier League rules stipulate that a one-match suspension would be accrued if a player were to pick up five yellow cards in the first 19 games.

No Liverpool player is currently on four, with Trent Alexander-Arnold (three) the closest, and therefore none will be able to hit the five-card mark against Chelsea.

Joe Gomez, Fabinho, Thiago and the injured Luis Diaz are the only players on two, with seven – Harvey Elliott, Virgil van Dijk, Kostas Tsimikas, Jordan Henderson, Darwin Nunez, Joel Matip and Diogo Jota – cautioned once so far in the league.

There is still a chance of a two-match suspension later in the season, with any player booked 10 times up to and including their club’s 32nd league fixture then forced to miss two games.

Of course, a red card will also lead to a ban, typically for up to three games, as was the case when Nunez was dismissed for headbutting Palace defender Joachim Andersen in August.

For now, though, there is no risk of a Liverpool player facing a one-match suspension like Casemiro.