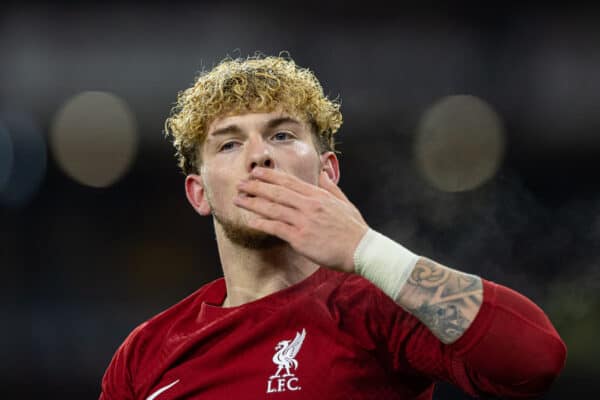 Liverpool produced a much-improved showing to edge past Wolves and book a place in the next round of the FA Cup.

Jurgen Klopp made eight changes to the team that produced a horror show at Brighton three days earlier.

Harvey Elliott, perhaps relieved to be playing in a more attacking role, opened the scoring in sensational style in the 13th minute.

The 19-year-old picked the ball up inside his own half and ran with it before unleashing a screamer from 20 yards past the rooted Sa.

Klopp had promised in his pre-match press conference that Liverpool would be better here than against Wolves, albeit admitting that wouldn’t be hard to do.

And the Reds looked much improved from recent showings, most noticeably pressing effectively and with energy.

Defensively, they were much more solid too, closing down in midfield and winning challenges or stopping attacks before they could get going.

Cody Gakpo, making his third consecutive start after his January move, looked to have a superb chance just after the hour, but he couldn’t finish and was offside anyway. The Dutchman’s finishing was sometimes erratic.

Wolves began to push for the equaliser, but for the most part Liverpool defended well and restricted any chances to half-chances rather than clear-cut chances – perhaps a valuable exercise after recent leaking of goals.

Cunha had a superb chance right on 90 minutes but his header lacked power and was an easy save for Caoimhin Kelleher.

Liverpool held on to get their first cleansheet since before the World Cup, which was against Derby in the League Cup.

The win means Liverpool will face Brighton in the fourth round, a week on Sunday – 29 January.