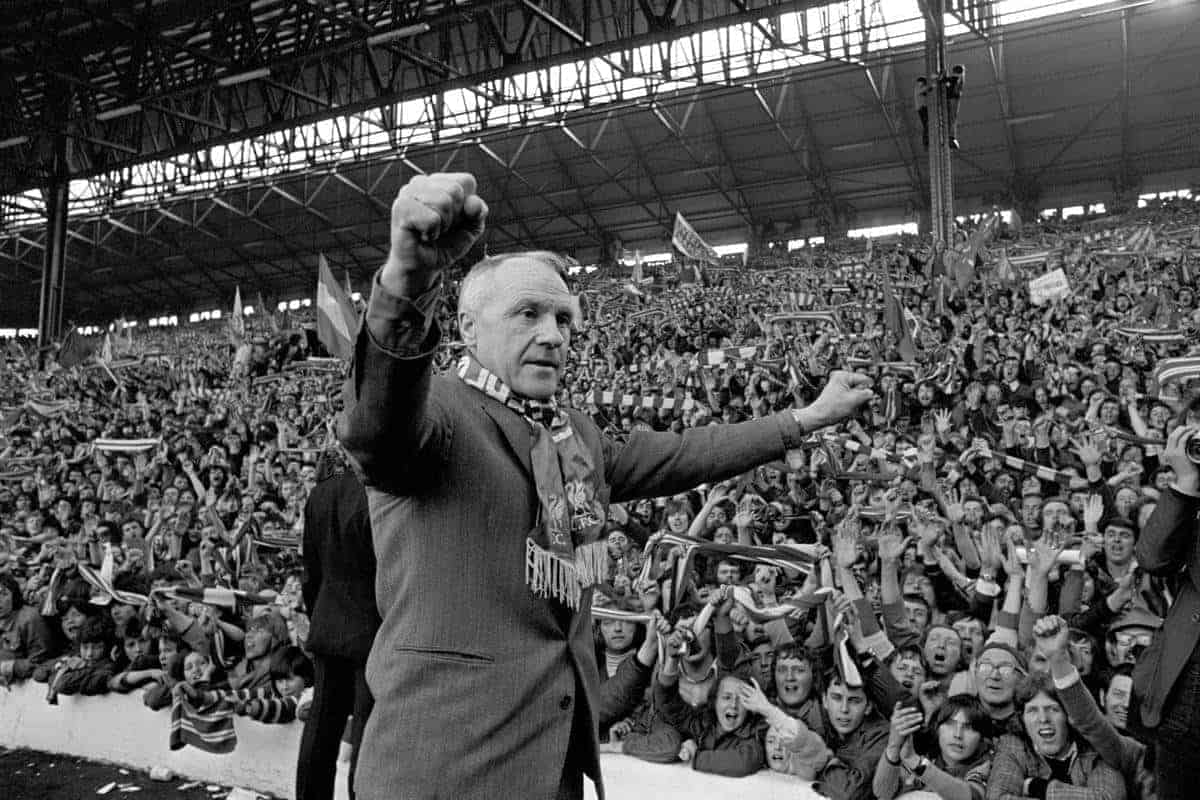 Born in the Ayrshire mining village of Glenbuck and one of several brothers who all went on to play professional football, Bill had a successful playing career with Preston North End, with whom he won the F.A. cup in 1938. His playing career was cut short by the Second World War and he eventually retired in March 1949 to become manager of Carlisle United, the club he had played for briefly before joining Preston in 1933.

Bill was never short of confidence in his own ability. Referring in his autobiography to his feelings about this first managerial appointment, he said ‘œI had the knowledge. I had been with people who knew how to train teams and I had my own conception of human beings and psychology.’ His methods were certainly different from some of his contemporaries. He was prepared to do any job however menial and instead of writing notes in the programme for the supporters to read, he preferred to use the tannoy to speak to them shortly before the start of each home fixture.

Carlisle was good for Bill Shankly and he for them but when the manager’s job at Grimsby Town became vacant he applied for the post. Although Grimsby had just been relegated and would therefore be playing in the same division as Carlisle, Shankly made the move ‘œbecause Carlisle did not have the money to make progress and because I thought there was more potential at Grimsby’. After two and a half years at Blundell Park, Bill made a surprising move to Workington Town, struggling towards the bottom of the old Third Division (North) and even threatened with extinction. Shankly was never afraid of a challenge and he turned things round at Workington until one day he was approached by his former Preston colleague Andy Beattie, the manager of First Division Huddersfield Town. Shankly became assistant manager but shortly after Huddersfield were relegated at the end of the 1955-56 season, Beattie left and Bill took his place.

Shankly was unable to take Huddersfield back into the top division but was making a mark for himself as a manager. However, he was again frustrated at the lack of finance available to strengthen the team at a club that probably didn’t match his own ambition. He went to Scotland to watch a non-competitive match and came back enthusing about two players he had watched closely. Those players were Ron Yeats and Ian St. John. As Bill pointed out ‘œYeats and St. John were the players Huddersfield needed, but they couldn’t afford to buy them’.

Shankly was approached by Liverpool chairman Tom Williams and offered the Liverpool job following Phil Taylor’s resignation. He knew immediately there was more ambition and potential at Anfield than there had ever been at Leeds Road and this time he wouldn’t take No for an answer when it came to signing players he knew would improve the squad and give them a better chance of promotion. Remembering what he already knew of Yeats and St. John, he told the Liverpool board he wanted to sign them. The short answer was ‘œWe can’t afford them’. But new director and local businessman Mr. Sawyer who shared Bill’s ambitions for Liverpool intervened and told his colleagues ‘œWe cannot afford not to sign them’. The two Scots were influential and instrumental in helping Liverpool out of the old Second Division. After a series of near-misses following relegation in 1954, they convincingly won the title by 8 points.

It would take only two more seasons before Liverpool won the League championship itself. There were already some fine players at Anfield when Shankly arrived and he would shrewdly add to his squad in the coming years. Winning the League in 1964 heralded the start of Liverpool’s European adventures. They were unluckily and controversially defeated by Inter-Milan in the 1965 European cup semi-final but had the ample compensation of the F.A. cup for the first time in the club’s long history. Disappointment in the final of the Cup Winners’ cup a year later was compensated by another League championship.

Not all of Bill Shankly‘s signings turned out to be as successful as he would have liked. Alun Evans and Tony Hateley had short Anfield careers but Emlyn Hughes was someone who didn’t fall into that category. Shankly tried to sign him after watching him play in his very first professional match but had to be patient before he finally got his man. It was a transitional time for the club. After that second title in 1966, the club would not finish lower than 5th for the rest of the decade. Maybe the manager kept faith just a little too long with the men who had served him so well in the middle of the 1960’s? But things changed one cold afternoon in February, 1970 when Liverpool were dumped out of the F.A. cup at Second Division Watford.

‘œAfter Watford I knew I had to do my job and change the team’, recalled Bill. ‘œIt had to be done and if I didn’t do it I was shirking my obligations’. Most of the old guard were phased out. In their place came the likes of Ray Clemence, Larry Lloyd, John Toshack, Steve Heighway & Brian Hall. Plus the inspirational signing of Kevin Keegan from Scunthorpe United. These men plus the younger players from the 1960’s like Smith, Lawler, Callaghan & Hughes who had survived the post-Watford cull would be the nucleus of another team that would win the championship; and when it came (in 1973) it was part of a double success because Liverpool’s first European trophy arrived the same year in the form of the UEFA cup.

A year later Liverpool finished runners-up to Leeds United in the First Division but again reached the F.A. cup final determined to avoid the heartbreak of their extra-time defeat to Arsenal in 1971. Newcastle were completely outplayed. It was the biggest margin of victory in an F.A. cup final since 1960. Bill was 60 years old. The announcement that would shake the football world was still a few weeks away. But he remembers sitting down in the dressing-room at Wembley and that he ‘œfelt tired from all the years. I knew I was going to finish’. In July 1974 he did just that.

It is terribly sad that after so much success, things became difficult between himself and the club he had served so well for nearly 15 years. Maybe there was fault on both sides? It was a difficult situation. ‘œI still wanted to help Liverpool, because the club had become my life. But I wasn’t given the chance’, recalled Shankly. It looks as if the club wanted a clean break, that it felt things could become too complicated if Bill was still around. He continued to go to Melwood for a while but got the impression it would be better if he stopped going. He said he would have been honoured if he had been invited to become a Director of the club (and he surely deserved that because of what he had achieved as a manager?) but the offer never came.

Bill Shankly seemed indestructible but he suffered a heart-attack in the Autumn of 1981 and died shortly afterwards on the 29th of September. His legacy can be seen at Anfield today but not just in the gates that bear his name or the statute at the back of the Kop. Shankly was the catalyst that Liverpool Football club needed. Other men carried on the job that he started but he was the father of the modern-day Liverpool and did as much as anyone and more than most to turn them into one of the great powers of first English and then European football. He had a vision when he arrived and he wasn’t afraid to make difficult decisions that he knew would benefit the club in the long term. The debt we as supporters owe him can never be repaid.