It’s another good old international break, arriving just in time to stop any momentum from our two wins last week, but at least it gives Keith chance to entertain us with another themed XI.

Having previously looked at our Scottish and English contingent’s, among others, Keith runs down our Eire connections…

The dismissal of former Liverpool and Republic of Ireland player Steve Staunton as Ireland manager last month was reason enough to begin considering how many other Liverpool players have represented the Emerald Isle.

The first major competition to involve a significant number of Liverpool players representing Ireland was at Italia ’90, where the Republic of Ireland was placed in the same group as England. That led to an interesting opening match for both squads, with several Liverpool team-mates facing each other on the pitch. John Aldridge, Ronnie Whelan, and Ray Houghton lined up for Ireland, while John Barnes, Peter Beardsley, and Steve McMahon lined up for England. That was the beginning of a period of uncertainty for many Liverpool supporters, who may have previously cheered for England but now put their support behind Ireland. Four years later, both England and Scotland failed to qualify for USA ’94, but Ireland were there as the only side with a significant number of Premier League players. By this time there were many more Liverpool supporters who had switched allegiance from St. George to St. Patrick, and that continues to this day.

So this Liverpool XI is to be made up of players who have played for Liverpool and have also represented the Republic. I’ll start as usual with the goalkeeper, and that would be the legendary figure of Elisha Scott, who was capped 31 times. The back three of a 3-5-2 formation will be made up of current Liverpool right-back Steve Finnan (49 caps), Jim Beglin (15) at left-back, and centre-back Mark Lawrenson (39).

Then in the middle of the park I’ll start with Ray Houghton (73), Jason McAteer (52), and Ronnie Whelan (53). Houghton of course scored that memorable goal in World Cup 1994 against Italy. 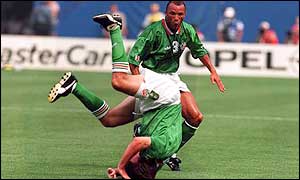 I’m then going to bring in Kevin Sheedy, who was briefly with Liverpool before crossing over to Everton and went on to be capped 45 times. Sheedy was also the first ever Republic of Ireland player to score in a World Cup final, in their opening group stage match against England at Italia ’90. One more midfielder to be brought in is Darren Potter (3), who played for Liverpool’s youth and reserve teams, as well as 3 appearances in the senior side, before his transfer to Wolves earlier this year. John Aldridge (69) has to be the obvious first choice up front, along with Michael Robinson (23).

On the bench, I have a mix of former reserve team and youth team players, with left-winger Jimmy Kelly from the 1920’s, and 1930’s era centre-half Matt O’Mahoney, who played for Liverpool Reserves before appearing for Ireland in 1938-39 while with Bristol Rovers. Then we have winger Brian Mooney who made several appearances for Ireland U-21’s and B teams, and midfielder Richie Partridge who is waiting to make his international debut. Finally, I’ll add a few more from the current youth squad, starting with midfielder Jimmy Ryan (currently out on loan), and then midfielder Shane O’Connor, and forward Michael Collins.

Irishman John McKenna was the first ever manager of Liverpool (with W.E. Barclay), but my choice for the man behind the bench is going to be Steve Staunton, and then have Honest John on staff as Director of Football. For assistant manager I’ll go with Kevin McDonald, who was not only Staunton’s assistant, but was in fact one of Steve’s coaches during his playing days with Aston Villa.

The complete line-up then is: