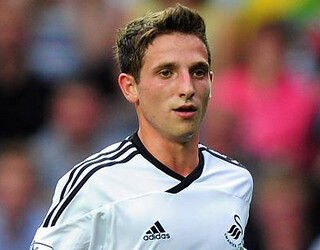 Liverpool have activated a release clause in Joe Allen’s contract to sign the midfielder from Swansea, according to The Times and The Guardian this evening.

By bidding £15m for the 22 year old, Swansea are obliged to accept Liverpool’s bid for the Welshman.

Allen has been a target for Rodgers since he left Swansea for Anfield in June, despite Liverpool signing an agreement not to raid their manager’s former club for players for 12 months. Liverpool have exploited a technicality in Allen’s Swansea contract that allows him to join one of five specified clubs – Liverpool among them – for £15m and, having met the price, the Wales international is free to hold talks over a move to Merseyside.

Liverpool had previously bid below the £15m, believed to have been £12m plus Jonjo Shelvey on a season loan deal, which was rejected by Swansea.

Previous reports had suggested Allen had already agreed personal terms with Liverpool and the move should now be completed quickly, making him Brendan Rodgers’ second signing of the summer so far.

Meanwhile, there are reports on Wednesday night that Liverpool have rejected a bid of £20m for defender Daniel Agger from Manchester City.

UPDATE: Allen was at Anfield to watch the match against FC Gomel on Thursday night and will complete his transfer on Friday.

Man United 0-5 Liverpool – As it happened