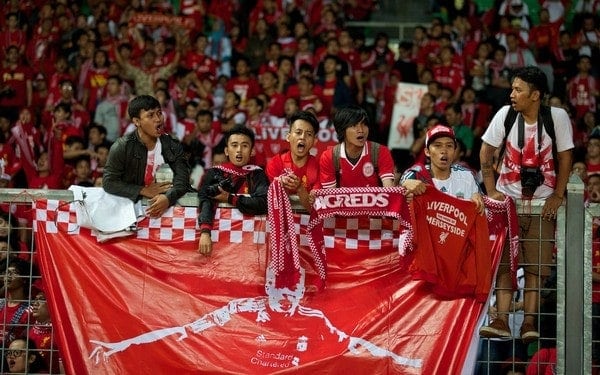 Brendan Rodgers has named a strong line-up for today’s pre-season friendly against Indonesia.

Almost 90,000 fans are expected to pack out the Gelora Bung Karno Stadium in Jakarta for the Reds visit.

The match is Liverpool’s second pre-season friendly of the summer, after beating Preston North End before leaving England last weekend.

Steven Gerrard plays his first game since undergoing shoulder surgery at the back end of last season, partnering Lucas in midfield.

Following Pepe Reina’s departure to Napoli, it will be interesting to see who Gerrard passes the captain’s armband to if he is substituted. Our money’s on Daniel Agger.

Last weekend Arsenal beat Indonesia 7-0. The team is a selection of the country’s top footballing talents.

Kick-off in Jakarta is 8.30pm local time (2.30pm UK) and is live on ESPN UK as well as streaming through the club’s official website (premium subscription required)