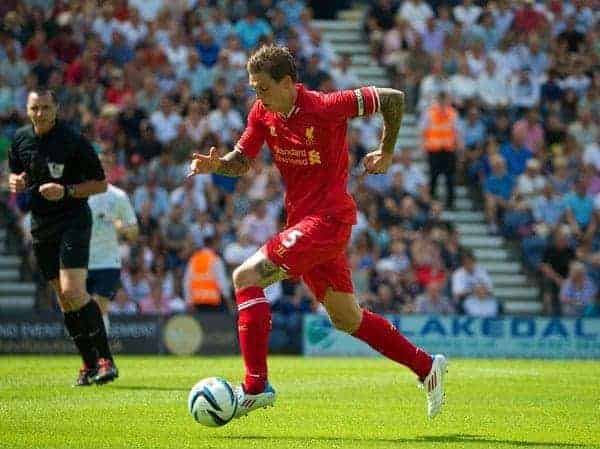 Daniel Agger’s agent has refused to rule out his player moving to Barcelona, saying it is a matter between the two clubs.

Reports on Monday suggest Barcelona may test Liverpool’s resolve with a second bid, after having a £17.5million bid for the Danish international turned down last week.

Agger was this week made vice-captain of the club, appointed following Jamie Carragher’s retirement at the end of the 2012/13 campaign.

Barcelona are expected to return with an improved offer for the Liverpool defender before the transfer deadline. And Agger’s agent, Per Steffensen, has suggested the Denmark international would consider a transfer to Camp Nou.

Brendan Rodgers is adamant Liverpool will retain Agger but that may change today as Barcelona wait to see if David Luiz will push to leave Chelsea.

However, Steffensen did not say Agger was pushing for a move to the Nou Camp, with the new Premier League season set to get underway next Saturday.

“We are aware that Barcelona have made an offer for Daniel that Liverpool have rejected,” he said. “Daniel has a contract with Liverpool for the next three years and it would be up to the clubs to agree a fee for his transfer in order for that to change.”

Liverpool will surely do everything they can to keep hold of Agger, following a summer of exit talk involving forward Luis Suarez.

Only last week, manager Brendan Rodgers spoke of the “refreshing loyalty” seen in Agger in his commitment to the club.

With Carragher having retired, seemingly replaced by the signing of Kolo Toure, and Sebastian Coates not favoured by Rodgers, selling Agger would leave only Martin Skrtel as an established centre-back partner for Toure – and Skrtel too has been strongly linked with a move away from Anfield.