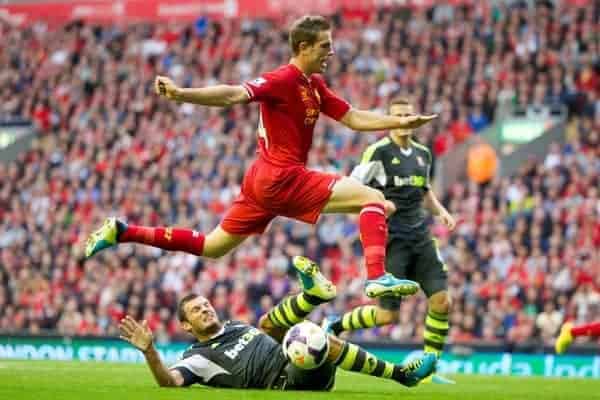 Jordan Henderson says he is ready for the fight to keep his place in the Liverpool starting line-up. The 23-year-old midfielder started Liverpool’s first game of the season – an opening day victory over Stoke City at Anfield.

With a range of midfield options at manager Brendan Rodgers’ disposal, Henderson knows how much competition he has to fend off to keep a foothold in the first team.

“It is always nice to play, I am sure that is the same for everyone,” Henderson is quoted on Sky Sports as saying.

“But we are a squad and there will be times when other people come in and I have to keep fighting for my place and hopefully stay in the team.

“The most important thing in your first game of the season at home is to win the game and that is what we got.”

Joe Allen will be seen as Henderson’s nearest rival, with the Welsh international hoping to break back into the first team after a shoulder injury dampened his first season at the club last time out.

Henderson was also is high spirits about the arrival of goalkeeper Simon Mignolet at the club after the Belgian international saved a late penalty to rescue three points for the Reds on Saturday.

“We had a lot of chances and we should probably have put it to bed a lot earlier but it wasn’t to be and the most important thing was to win the game,” he added.

“I thought Simon was brilliant with two brilliant saves at the penalty and the follow-up after that. That was magnificent.

“It is a good way to announce yourself at Liverpool.”

Liverpool now travel to Aston Villa on Saturday for their next Premier League encounter.

Villa enjoyed a shock 1-3 victory over Arsenal at the Emirates Stadium on the opening day of the season.