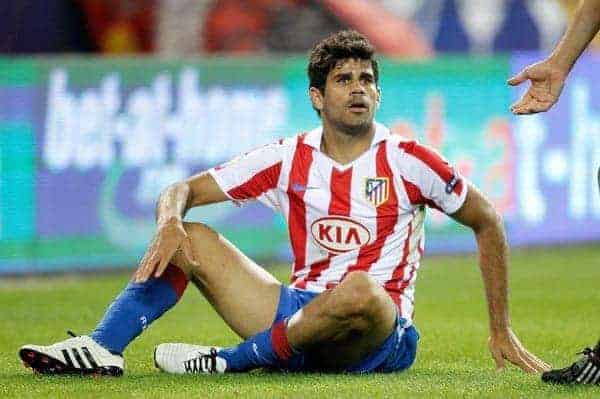 Liverpool have admitted they won’t be signing Brazilian attacker Diego Costa, despite reaching his buy-out clause of £22million with Atletico Madrid.

Reds boss Brendan Rodgers says he believes Costa has now committed his future to the La Liga side by signing a new contract.

Liverpool had hoped to bring the firey 24-year-old to Anfield to bolster their attacking ammunition, but must now turn their attentions elsewhere.

“I believe Costa has signed an extension. There’s nothing in terms of players to add,” Rodgers is quoted as saying by the Daily Mail.

“We’ve signed players early on and we hope to sign some more before the end of the window. In the meantime, there’s nothing at the minute.”

With it looking perhaps more likely that Luis Suarez will remain on Merseyside, despite this summer’s transfer saga, Rodgers may well be tempted to improve his squad in areas other than attack.

However, Costa was never seen as a replacement for Suarez.

Rodgers has already admitted he his keen to bring in a new left-back to provide competition for a first team place for Jose Enrique, who is the club’s only recognised left-back after Jack Robinson was sent on loan to Blackpool earlier this month.

This week French left-back Aly Cissokho said he had agreed to move to Liverpool, but was waiting on his club Valencia to reach a deal with Liverpool.

However, Rodgers distanced himself with that speculation too.

“There’s nothing on the Cissokho story,” he added.