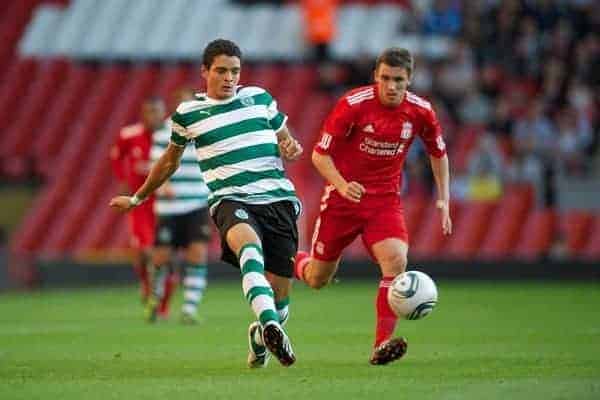 Liverpool have agreed a £8million fee for Sporting Lisbon centre back Tiago Ilori, according to a report in The Mirror.

The 20 year old Portuguese, who was born in London, is reported to be travelling to England to agree personal terms after the two clubs agreed a fee.

Liverpool have been linked with Ilori all summer, and reportedly had a bid a £3m turned down for him earlier in the transfer window.

Ilori is yet to make his full senior debut for Portugal, but his highly rated as a prospect for the future within their domestic league.

Earlier this summer, we provided a scout report on Ilori, which detailed his talent:

Unlike most tall central defenders, Ilori is surprisingly not slow when it comes to his movement. In fact, he is exceptionally pacey; not just for a defender. At Sporting CP’s academy, the club staff conduct speed tests on players and Ilori currently holds the academy record beating the pace set by the likes of Cristiano Ronaldo and Nani before him. This is a great asset to have in a defender.

Ilori, unlike some young defenders, is always willing to have the ball at his feet. He doesn’t nervously hurry for clearances but rather prefers to take his time on the ball. Give him the slightest invitation and he will readily advance forward with the ball. He could have adopted these traits from his days playing as a striker.

When asked about Ilori, among others, at his press conference on Friday, manager Brendan Rodgers refused to be drawn.

The Reds are also expected to complete a deal for goalkeeper Shay Given on a season loan from Aston Villa.

The Anfield club are in talks with both clubs and hope to reach an agreement on the respective deals over the weekend.

The 23-year-old Sakho, who can play as a centre back and on the left, has played 14 times for France and is likely to cost around £13m while Ilori, 20, is one of the most promising young defenders in Portugal. Both players are expected on Merseyside for medicals and further talks in the next 24 hours.

So, Given, Sakho and Ilori are deals which Liverpool are actively working on, while a loan deal for Victor Moses could also add attacking depth.