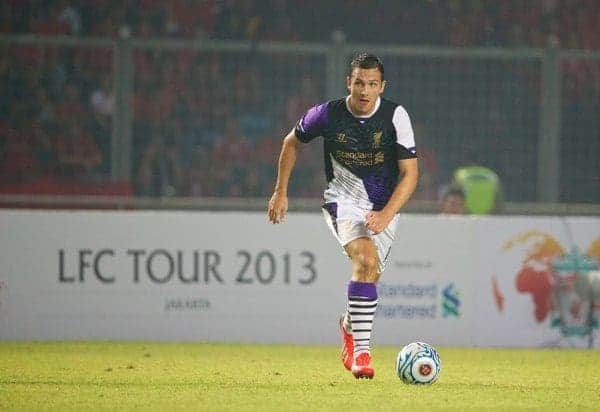 Stewart Downing has left Liverpool and completed a £6million switch to West Ham, it was confirmed today (Wednesday).

PIC: Here's Stewart posing with his new No23 shirt at the Boleyn Ground this afternoon. #COYI pic.twitter.com/Oa1m4RNwJ7

The winger has signed a four year deal with the East London club – the fifth club of his career.

“I’m very excited. It’s a great opportunity for me being here, it’s a great club and I’m really excited to get going,” Downing told press on his arrival.

“I’m ready and I’m fit for the first game against Cardiff City. I’ve played a decent few games for Liverpool in pre-season, so there will be no problems on that front.

“It’s all happened quickly, but I’m really excited and hoping to play a part on Saturday.”

Despite the distraction of Liverpool transfer rumours linking Luis Suarez with a move away from the club throughout the summer, business seems to be being conducted in an efficient manner at Anfield.

Brendan Rodgers said over the weekend that he expects to bring in some new faces to the squad before the transfer window is finished, to replace this summer’s departures.

Downing’s time at Liverpool was overshadowed by the £19million transfer fee he cost the Reds when he moved from Aston Villa in 2011.

Despite a late surge of form last season under Brendan Rodgers, the club saw the time was right for the 29-year-old, reported to be on wages of over £100,000 a week, to move on.

The former Middlesbrough trainee made 91 appearances for the Reds, scoring seven goals.

Downing is the third player in recent times to swap Anfield for Upton Park, following in the footsteps of Joe Cole and Andy Carroll.

Downing could face his former Liverpool teammates when West Ham come to Anfield in the Premier League on Saturday, 7th December.

Later this afternoon, come back to This Is Anfield as we will have the latest opinion column from Joseph Copeland, explaining why Downing’s move to Anfield was doomed from the start.