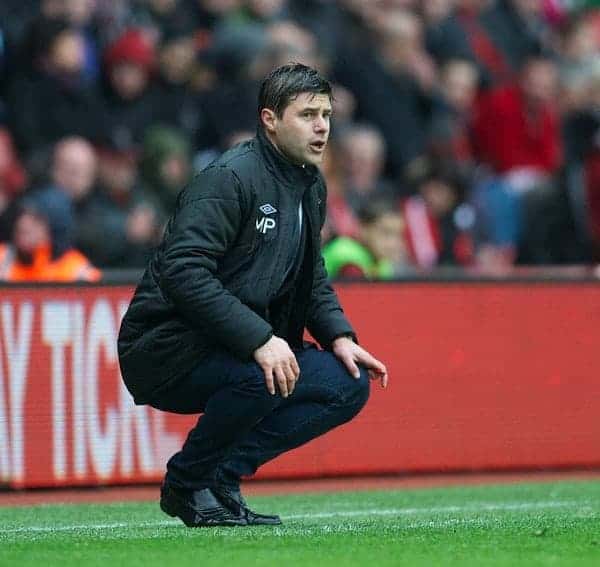 With Reds knowing what the Redmen do best, Rory Fitzgerald provides an in-depth analysis of what Liverpool may face from the opposition on Saturday. Southampton have a very clear game plan under Maurico Pochettino. Under previous manager Nigel Adkins, Southampton took a more patient approach and looked to be compact in their own half especially against the stronger teams. However, the new manager changed the mind-set and now has the team hunting the ball down in the oppositions half when the possession is lost. The key to this tactic is Lambert and the attacking midfield trio with Wanyama & Schneiderlin backing them up. That midfield of players are all energetic enough and aged between 18-25yrs to carry out such gameplan. Young Jack Cork, who has now been displaced by Wanyama in the team, commented last February on the new high intensity pressing game saying “…it does feel like you need two hearts to play like that“.

Liverpool fell foul of this badly at Southampton last season losing 3-1. Liverpool’s passing options were continuously closed down in midfield resulting in the ball going back to the full back or center half and then invariably, to Brad Jones who had no options for a short ball resulting in a more speculative pass being attempted resulting in us having no real control of the game. It was one of the most disjointed and uncharacteristic performances of the season. However, this result was not a one-off under Pochettino with his side also beating Chelsea 2-1 and Man City 3-1 at St Mary’s in the 2nd half of the season and drawing 1-1 with Arsenal.

It will be interesting to see where Southampton engage Liverpool at Anfield because it is one thing to do it at St Mary’s high up the pitch and another thing at Anfield. There are only 2 real reference points to look at from last season when Pochettino took charge of 2 games away at teams in the top 7, they were Spurs and Utd. Southampton took the lead at Old Trafford but lost 2-1 and had squandered some great chances at White Hart Lane before losing out 1-0 to a cracking Bale long shot with 4mins to go.

Mauricio Pochettino’s side recovered well in the second half, pressing their hosts from the front. Afterwards, Alex Ferguson commented “We were fortunate to win the game. They pushed on top of us and didn’t give us any time on the ball.”

The result was cruel on Southampton, who created many of the best chances…. Tactically smart, the visitors’ work-rate was also admirable. Villa Boas said after the game “It was difficult to break them down. In the first half, Southampton had the better chances, but we managed to hold on to 0-0 and then in the second half we improved and were much better and created a couple of chances, because Southampton did ever so well. They kept the ball well.”

Below is the kind of set up I think Liverpool can expect on Saturday, a kind of 4-2-3-1. Southampton set up this way in their opening 2 games i.e. Lambert upfront on his own but for the next 2 games, Osvaldo joined Lambert in attack with Rodriguez and Ward Prowse taking turns to miss out and the system becoming a flatter 4-4-2 though Osvaldo would at times drop off. However, I don’t think they will be as bullish at Anfield. The attacking midfield trio is a key area within Southampton‘s set up. Not only do they chip in with plenty of assists and goals, but they defend from the front with support coming from one of Wanyama or Schneiderlin with the other holding. If Ward Prowse, Lallana & Rodriguez do get the nod to start, they are likely to take starting positions as shown below i.e. Ward Prowse (right), Lallana (central/floating) and Rodriguez (left) but given plenty of licence to come inside and switch.

However, the graphic above, along with the perception of Lambert being a strong physical striker that scored 15 league goals last season, may create an impression that Lambert is a central focal point for Southampton ala Peter Crouch – the kind of player that operates very much centrally. However, Lambert is a player that provides plenty of movement to drag defenders out of position and create space for the midfielders to join in the attack.

Lambert is a striker that is physically strong, good in the air but also has sound awareness and a good touch which allows him to play a more rounded role within the team than just an ‘English No.9’. With players like Lallana, Rodriguez, Gaston Ramires and now 18 yr old Ward-Prowse making runs from deep, Lambert can play the role of a link man or just a decoy runner. Last season against Man City he played a key role in each of their 3 goals. From the right, from the left and making a diagonal run from a central area.

The above is further demonstrated with these heat maps. Against Swansea, Liverpool faced Bony & Michu. In general Michu is the player that operates that bit deeper than Bony but at times they will interchange obviously. For the most part, Bony operated fairly centrally and whilst Michu was the player that played a bit deeper, he was more focused on receiving the ball in central positions rather than floating across the front line – something that Liverpool see when Aspas and Coutinho play there. However, the distinction is fairly clear when we see the kind of positions that Lambert took up. Whilst he can play the No.9 role upfront, he does alot more than that to link up play and create space for the likes of Lallana.

Whilst Southampton may look to get the likes of Lallana & Ward Prowse around Lucas & Gerrard in high areas of the pitch with Lambert occupying the center backs, it is still likely that Liverpool will be able to force their team back behind the ball in the last 3rd of the pitch. One of the ways to counter-act a pressing game is to try use the full backs and flanks as much as possible. If not, the wider players for the opposition can tuck in a bit more to reduce space in midfield without feeling the risk of exposure behind them. With Johnson likely to miss the game, its an option that we are likely to miss. However, if Liverpool do manage to push Southampton back for periods of the game, the following is an example of where we could be vulnerable given the attacking players that Southampton have. Against Swansea, Sakho stepped out of the defensive line and within the blink of an eye, Shelvey darted into space, Britton picked out the pass and Michu was already on the move into that area to support Shelvey. Whilst the gap was available it took 3 things to happen, almost on instinct (1) the run (2) the pass and (3) the movement and finish from Michu……fine margins. The gap above is a bit wider than a fine margin and something for our midfielders to be wary of if the full backs get caught because it will be Lucas and Gerrard that will need to get back and track the runners.

The preview to the Swansea game highlighted the importance of Canas and the other deep midfielder in Swansea’s approach to dominating possession. Their counterparts in the Southampton team, Schneiderlin & Wanyama, carry out a different function for Southampton. Away from home Southampton had most of the possession vs Norwich (55%) and vs WBA (53%). In fact, the stats say that Southampton have had the 2nd most average possession so far this season! However, the teams they have played against rank 16th, 17th, 18th and 20th when it comes to average possession so I don’t think its indicative of a team that could be looking to come to Anfield to control a game. Looking at the 2 away games, Schneiderlin & Wanyama had the 8th & 6th most passes in their team and ranked 4th & 5th vs WBA in the same stat. The stats show that the 2 central defenders and 1 of the full backs always ranked ahead of the defensive midfielders (see stats below regarding football played in own 3rd of the pitch).

Furthermore, the graphics below show that, when away from home, Southampton play the least amount of football in the middle 3rd, the most in the defensive 3rd and are prone to hitting a longer pass than other teams. Combined with the number of passes the midfield duo make, they do not seem to be given the mandate of dictating the pace and tempo of a game rather use their athleticism to get around the pitch both on and off the ball. Schneiderlin has made the most tackles within their team and Wanyama the 2nd most interceptions.

The main lesson Liverpool need to take from the defeat at St Mary’s is that Southampton spend alot of energy in midfield hunting down the ball. Perhaps they may not engage Liverpool as high up the pitch as at St Mary’s but they made impressions on Ferguson and Villa Boas when they played away so we are almost guaranteed to see a side working together to close down space and options with the men at the front leading the way backed up by the athleticism and tenacity of Schneiderlin & Wanyama.

Games involving Southampton this season have finished, 0-0, 1-0, 0-1 and 1-1. The energy that they spend is generally replaced in the 2nd half with 2 of the 3 attacking midfielders frequently subbed with Lallana failing to see past the 72nd minute in any game this season. Saturday could prove to be one of those difficult Anfield days when the opposition remain tactically disciplined and put in a huge work rate to try frustrate Liverpool.

On the ball, Southampton are unlikely to channel play through their midfield duo like Swansea, rather their average passes are a bit longer. Given that;

We could see a team that looks at getting the ball into their attacking midfielders (either on the flanks or infield) from deep areas and look to build attacks from there quickly if opportunities arise to exploit space.

As for Liverpool, the key will be to counter their energy with plenty of movement to give options to the man on the ball, something we were woefully short of doing at St Mary’s. If we can play around their attempts to press us then their back 4 is something we can get at and create chances for Sturridge. Width will also be crucial and we could see a more focus going down our left with Enrique & Moses offering a different dynamic on the left than Wisdom & Henderson on the right and could be a good outlet for Gerrard to switch play from right-of-center out to the left if Southampton squeeze in-field and leave some space here.