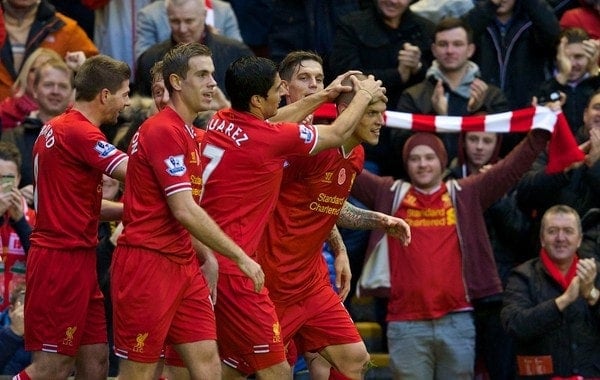 Liverpool are now twelve games into their 2013/14 season. Aaron Cutler takes this opportunity to assess our summer signings so far. Eleven games into the Premier League season and Liverpool sit pretty. Two points adrift of leaders Arsenal, the reds encouraging start has ratcheted up expectation. What began as a sceptical bid for Champions League qualification may yet morph into an unexpected title tilt. Indeed as Brendan Rodgers side improve, their rivals have developed a curious case of inconsistency. It is becoming evident that 2014 represents the best opportunity in six years to book a seat at Europe’s top table.

The Gunners clinched fourth spot last term with a points haul of 73. Brendan Rodgers side are currently averaging better than two points a game, putting them well on course for a top four berth. Big hurdles still remain, with a daunting Christmas period likely to define our season overall. But to this point we have fared well, generally taking advantage of an unusually kind fixture list. Moreover our standard of play is beginning to emulate the end of last season.

Take defeat to Arsenal out of the equation and the team has appeared far more fluid and dangerous in recent weeks. West Brom and Fulham were defeated with no small amount of swagger, Liverpool adding panache to supplement victory. Phillipe Coutinho has returned to add greater creativity, while Luis Suarez is playing like a man possessed. The signs are positive and should we can take advantage of a seemingly ‘routine’ set of home games between now and February, even a slight blip could be overcome.

With a quarter of the season now gone, time has come for initial judgement on summer acquisitions. In all Liverpool signed eight first team players during the last window. Two months since its close, some have made a bigger impact than others.

A long-awaited ‘marquee’ signing , Mamadou Sakho was billed as the brute force Liverpool’s defence so badly craved. At just 23 he packed considerable pedigree – having captained PSG and featured for the French national team. Big and imposing, it was hoped he would strengthen a suspect rearguard.

Sakho’s arrival was viewed as the final nail in Martin Skrtel’s coffin, however if anything the Slovak has inhibited his integration. Since starring in the defeat of Manchester United Skrtel has featured in every game. So impressive has been his form that Rodgers has even changed systems to accommodate three or four centre halves.

At Swansea a 3-5-2 was deployed, while Sakho and Kolo Toure even occupied full-back roles in a doomed experiment at home to Southampton. Both players were relegated to the bench last weekend, testament to Skrtel’s rebirth.

Sakho’s omission was slightly harsh given his improved form. An eventful start at The Liberty Stadium frightened many but in time the Frenchman has grown more composed and distinguished. An initial tendency to jump-in has been quelled, while his possession stats are always high. Indeed, a success rate of 92% for passes attempted is nothing short of exceptional for a defender.

If anything he looks better in a three. Having two experienced centre-halves beside him has aided his adjustment to the English game. It offers greater protection while he beds into the league. Eventually, one would expect him to line-up as one of two in a back four.

That big frame of his may occasionally cause problems – he can be slow on the turn and wayward in the clearance – but rest assured he is far from Djimi Traore Mk II. He is improving with every game and has all the hallmarks of a top long-term signing.

The biggest compliment you can pay Simon Mignolet is that very few supporters hanker for the return of Pepe Reina. When news broke of the Spaniard’s departure in July it caused a huge stir and led many to question both management and ownership. However Reina’s Belgian replacement has won widespread praise for his form between the sticks.

A nervy debut was transformed following a stunning save to deny Jon Walters at The Kop End. Any remaining doubters were then silenced when a last minute penalty stop from the same player sealed a dramatic opening day victory. A fairytale beginning, he has grown in stature since.

Mignolet’s greatest attribute is his shot-stopping. Put simply, he loves saving things. Only two keepers (David Marshall and Tim Krul) have saved more shots in the Premier League this term, while only three (Artur Boruc, Hugo Lloris and Ben Foster) boast a higher save percentage – Mignolet’s an impressive 80%.

Yes, there is room for improvement. He can be fallable from crosses, while his distribution can sometimes go awry. Nevertheless, Liverpool’s preferred open style is always likely to concede chances and with that in mind, Mignolet is a superb last line of defence.

Perhaps harshly so, Iago Aspas has been identified as this year’s whipping boy. In many ways he inherited the tag from Fabio Borini, who has been forced to seek first team football on loan at Sunderland. Aspas was bought on the back of a fine season for La Liga strugglers Celta Vigo. His energy and goals essentially staved-off relegation but he has found life on Merseyside hard.

At 26 he is no novice and must shows sign of improvement on his return from injury. Failing that, his could be a short stay. He works hard and has shown the odd flash of trickery but competitively at least he has rarely looked like scoring. He is also found wanting physically. Built like a ten year old choir boy, he is outmuscled and outfought far too often.

A goal will do his confidence the world of good and also relieve some of the pressure applied by the number 9 shirt. Aspas has quality and can also occupy any position across the frontline. His Anfield career is by no means a write-off but of all our summer signings, his Liverpool career has been the slowest to get started.

Luis Alberto has been no more than a peripheral figure thus far but shown enough in cameos alone to suggest he has a bright future. Good on the ball, he keeps things ticking over in the middle of the park and brings a degree of calm to proceedings. He also has an eye for goal, best evidenced against Sunderland’s Reserve team, against whom he fired a second half hat-trick.

Only just 21 he is very much one for the future and clearly a player in the Rodgers mould. A product of Sevilla, he enjoyed a successful spell at Barcelona B, the perfect grounding for a young professional.

Luis Alberto – along with the likes of Jordon Ibe and Tiago Ilori – will suffer from a lack of European and League Cup football. Both competitions would have allowed for first team experience and a stepping stone between reserve and top flight action. As it is, he will feature only sporadically between now and May unless an injury crisis takes hold.

The signing of Kolo Toure hardly filled Kopites with excitement heading into the summer market. A free transfer, his age and backside suggested his days as a top Premier League defender were well gone.

Ever the professional, the Ivorian immediately set-about disproving his critics. A solid pre-season carried over into competitive action, where he starred against both Stoke and Villa early on. Injury curtailed his initial impact but Toure has returned to the fold in understated but efficient style.

The former Arsenal man’s impact is atmospheric as well as practical. With Jamie Carragher retired, Liverpool lacked leadership on the field, something Toure offers in abundance. Always talking to his teammates, he cajoles and sets a great example.

Physically sturdy, he is far better on the ball than many give him credit for. Likewise, at 32 he still possesses decent pace and is seldom shown a clean set of heels. As free transfers go Toure looks more Gary Mac than Joe Cole. Already a cult figure, his influence on and off the field could prove crucial come this season’s run-in.

When Victor Moses joined Liverpool on loan he did so on the proviso he would gain regular first team football … but things are never quite that straightforward. The Nigerian came into the team immediately but has gradually been phased out due to a change of personnel and systems.

The Chelsea winger has looked promising in patches. He carries the ball as well as anyone in our squad and is always open to receive a pass. Add to that a goal threat and some decent inter-play and he has plenty to offer.

His undoing was the change to 3-5-2, wherein he played the ‘Coutinho role’. Never a number 10, he looked far more comfortable on the wing than behind Suarez and Sturrdige. To his credit he did OK at the head of the triangle but Jordan Henderson played the position far better when selected at home to West Brom. The England man has the energy to press and harass opponents high, as well as the endurance to track back and cover for Steven Gerrard and Lucas when needed. That’s HIS game, not Moses’.

With Coutinho restored to the starting line-up opportunities may be limited. Moses might be seen as a more experienced alternative to prospects Raheem Stelring and Jordon Ibe. What he does offer is quality in reserve and an attacking option from the bench. He will have a role to play but whether it’s frequent enough to satisfy him long-term is debatable.

So alarming was Aly Cissokho’s horror show at The Emirates it caused Jimmy Case to proclaim he should never play at left-back again. A little harsh, he was caught napping for Santi Cazorla’s opening goal, failing to track the run of Bacary Sagna quickly or closely enough. Hooking him at half-time was surely punishment enough.

Once a £12m rated defender, Cissokho’s stock has fallen considerably. In truth, Liverpool only perused his loan signature after being priced out of a deal for Guilherme Siqueira. A problem position since the departure of John Arne Riise, Liverpool have not had a truly top class left-back for 30 years. Cissokho is unlikely to buck the trend.

He offers decent width and can be refreshingly direct at times. But is he an upgrade on Jose Enrique? Sadly not. A squad player at best, he will have to go some way to earn a permanent transfer.

Only observers of reserve team football can pass comment on Tiago Ilori’s introduction to the English game. Another victim of a reduced footballing calendar, he is unlikely to make a competitive debut this term.

In U21 action he looks cool and collected. Classy in possession he sprays the ball around like a deep lying midfielder. He is also lightening quick, which will prove an invaluable asset come his eventual bow. Whether he can stand-up to the physical element of the league remains to be seen. Fans held high hopes for Sebastian Coates and even Gabriel Paeletta before him – only for both to fall by the wayside at Anfield.

At 20 years old Ilori is one for the future. Loaning him out in January, perhaps to a Championship side, would expose him to the cut and thrust of English football without the overwhelming pressures of playing for Liverpool. He could well be a new Daniel Agger or just another Coates. Only time (and games) will tell.