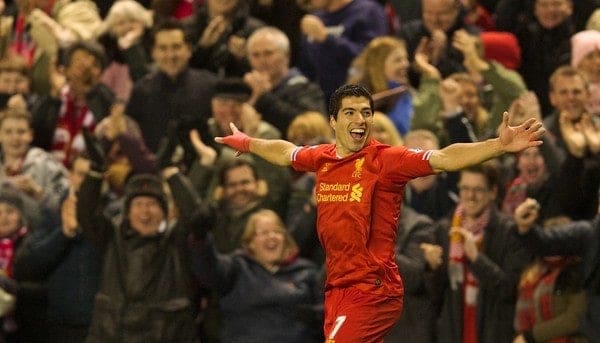 Luis Suarez produced one of the finest individual performances ever seen at Anfield on Wednesday evening, firing four stunning strikes past Norwich City in a 5-1 win for the Reds.

Henry Jackson looks at the the four other occasions when Liverpool players have hit four in the Premier League era.

Fowler was in his absolute prime at this point in his Liverpool career, and the then 20-year-old produced a virtuoso display against Bolton Wanderers at Anfield.

The youngster was keeping Reds legend Ian Rush out of the side at the time, and he more than justified his inclusion on the day. Two typically clinical finishes in the first half gave Roy Evans’ side a 2-0 cushion at the break, and ‘God’ continued his relentless form after the interval.

He added a close-range effort to complete his hat-trick, before bending a fabulous fourth into the corner of the Kop net. Two consolation goals for the visitors and a Steve Harkness goal rounded off the scoring, but the day belonged to the magnificent Fowler.

Just over a year later ‘God’ was back to his old tricks again, and this time it was Middlesborough who were the victims of his brilliance.

It took the 21-year-old just 30 seconds to open the scoring after good work by Stan Collymore, and he doubled the lead soon after, responding quickest after Collymore’s effort had come back off the post. It was his 100th goal for Liverpool, and he’d managed it in one game fewer than the prolific Rush.

Stig Inge Bjornebye added a third on the stroke of half-time, while Jan Arge Fjortoft scored for ‘Boro, before Fowler continued his magic late in the second half. He got his third after great link-up play with Steve Macmanaman, before a terrific individual effort saw him grab his fourth of the match. He was untouchable at this point.

It’s worth noting that Fowler also scored five in a League Cup tie against Bolton in October 1993; only the fourth Liverpool player ever to achieve that feat. Owen was still just 18 when he tore Forest’s defence to shreds 15 years ago.

He bent a wonderful effort into the top corner of the Anfield Road net to open the scoring and, although the visiting side equalised through Dougie Freedman, the  youngster was far from finished.

Macmanaman put the Reds 2-1 up, before Owen got his second of the game in the 38th minute, firing a clinical low effort past Dave Beasant. The England superstar got his hat-trick from the penalty spot, before a fine solo effort saw him grab a fourth on the day.

Almost five years later, after many hat-tricks for the club, Owen scored another quartet against a beleaguered West Brom side.

The then 23-year-old scored the only goal of the first half, firing past Baggies ‘keeper Russer Hoult with typical aplomb. Milan Baros doubled the lead after 46 minutes, before Owen scored his 100th Premier League goal just 60 seconds later.

The former Anfield hero grabbed his third of the game after good work from Baros, and his fourth was clinical, finishing well from Danny Murphy’s terrific pass.

Baros completed the scoring on a memorable day for Liverpool and, more impressively, Owen.

Is Suarez’s four-goal haul the greatest you’ve seen as a Liverpool fan? Where does he rank alongside Fowler and Owen in your opinion?