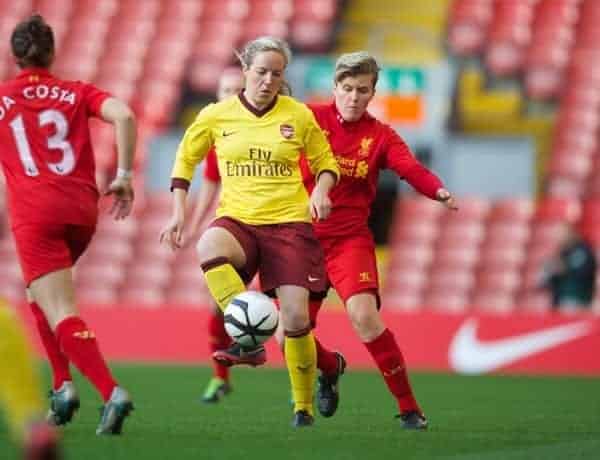 Liverpool Ladies have signed England international winger Gemma Davison from Arsenal Ladies to bolster their experience and quality ahead of the new Womens’ Super League. It is currently the off season for the WSL, which sees a new look and news teams when it resumes in March.

Matt Beard’s Liverpool Ladies are the current champions and Beard was delighted to welcome Davison to his squad on Tuesday.

“Gemma is a fantastic signing for us,” Beard told the club’s official website. “She is a strong, talented player who has a great deal of experience and knowledge of the game.

“Her addition will add strength to the team, which will be vital for us going into a challenging season and the Champions League.”

We are delighted to announce the signing of Gemma Davison. More details to follow on our website shortly. pic.twitter.com/rc6Zcd78Mp

The 26-year-old has played in the Womens’ Professional Soccer League in the USA, where she played for New York Magic, Chicago Red Eleven, Buffalo Flash, Western New York Flash and Sky Blue FC, before return to Arsenal Ladies.

She received her first and only England cap when she came on as a substitute in a 2-0 defeat to Iceland back in 2009.
Davison is relishing the new opportunities in front of her at Liverpool.

She told the club’s official website, “I am excited to embrace a new challenge with Liverpool Ladies and I am delighted to be a part of the squad that will be defending the title.

“There are so many talented players here that I am looking forward to playing alongside.”