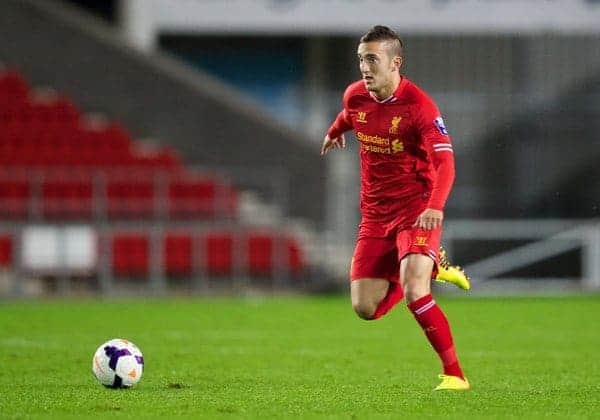 Liverpool under 21s saw off Aston Villa courtesy of goals from forwards Michael Ngoo and Samed Yesil on Monday night, but it was the performances of midfielders Joao Carlos Teixeira and Cameron Brannagan that caught the eye.

Alex Inglethorpes’s side were without several players who have featured for the under 21s this season but are now training with the first-team squad, such as Jon Flanagan, Tiago Ilori, Jordon Ibe and Raheem Sterling, while Ryan McLaughlin was missing through injury.

Samed Yesil continued his return from cruciate ligament injury, replacing Ibe from the side that beat Middlesbrough in the last U21 Premier League match, at Middlesbrough almost a month ago.

Yesil lined up on the right side of attack, with Michael Ngoo continuing through the middle and Teixeira playing from the left.

It was the German Yesil who opened the scoring, finishing via a deflection on 25 minutes after some excellent work from the impressive Teixeira. The goal was Yesil’s first since January, following his injury days later that has kept him sidelined since.

Teixeira was making things happen, drifting inside from the left in a similar fashion to Coutinho does for the first-team. This also allowed Brad Smith to impress from left-back, taking advantage of the space this afforded him on the overlap out wide.

It was Smith’s excellent cross that landed on the head of Ngoo to make it 2-0 before half-time.

Liverpool were by far the better side in the opening 45, rarely troubled at the back. But it was slightly less comfortable in the second 45.

Villa were improved after the break and Liverpool were often a little too casual at the back, with goalkeeper Danny Ward making several good saves to maintain the cleansheet.

Liverpool had a couple of chances to add to their tally late-on, Jordan Rossiter heading wide from another good cross by Smith, and Jack Dunn putting wide when in on goal.

It was a productive night for Inglethorpe’s side, who host Bolton next Monday at the academy.

Man of the match: Teixeira