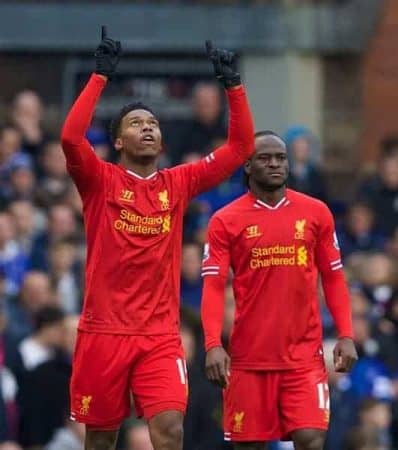 Daniel Sturridge set for Liverpool return at Stoke on Sunday

Daniel Sturridge is set to return to first-team action this Sunday against Stoke City, slightly ahead of schedule in his recovery from injury.

The Liverpool striker suffered ankle ligament damage during a training session in November and has been sidelined since.

The Reds take on Stoke at the Britannia Stadium in the league this Sunday, 12th January 2014 at 4.10pm.

Although his time out has seen a meteoric rise in form of Luis Suarez, England international Sturridge’s return will be welcomed by all at the club.

The England striker, 24, came through an intensive training session on Monday, increasing hopes that he is over the injury that has forced him to miss his side’s last nine games, sources told ESPN FC.

In last Friday’s pre-Oldham game press conference, Liverpool assistant boss Colin Pascoe gave an update on Sturridge’s fitness, saying, “Sturridge is out there training and looking good, but you’ve got to assess it day by day and hope it won’t be too long.”

Sturridge enjoyed a blistering start to the Premier League season, with 11 goals in his 14 appearances this season.

In total, the former Chelsea forward has scored 22 goals in 30 appearances for the Reds, since his move from Stamford Bridge a year ago.

Liverpool are still sweating on the availability of Daniel Agger, who was forced from the Reds’ 2-0 FA Cup victory over Oldham on Sunday with a knee injury.

Joe Allen is also a doubt after picking up a knock against Chelsea at the back end of December, but PhysioRoom.com are reporting that Mamadou Sakho should be fit to face Stoke at the weekend:

Meanwhile, Raheem Sterling has revealed that a stright-talking half-time discussion from Brendan Rodgers helped Liverpool turn their poor game around against Oldham on Sunday. Read more about that here.