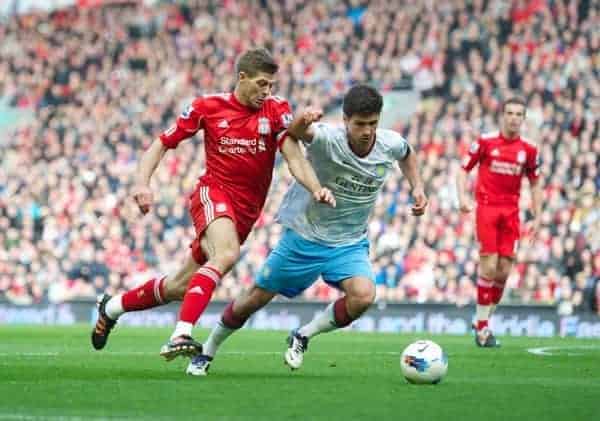 The Reds have had mixed fortunes against Aston Villa over the years, and Henry Jackson (@OnFootballTweet) looks back at the last five clashes between the two sides at Anfield. Brendan Rodgers’ side endured a terrible afternoon at the hands of Paul Lambert’s men in the most recent Anfield meeting between the two sides.

Christian Benteke gave the visitors the lead in the 29th minute with a tidy finish, before Andreas Weimann’s beautifully-worked effort doubled their advantage before the break.

Benteke out-muscled Liverpool’s defence to put Villa 3-0 up after just 51 minutes, and although Steven Gerrard scored a late effort for Liverpool, it was a dark day for the Reds. Kenny Dalglish‘s Liverpool had lost three games in a row prior to this clash during the 2011/12 season, and although they stopped the rot, a draw was still a poor result on the day.

Chris Herd fired in a shot early on to give Villa the lead, and it stayed that way until Luis Suarez came to the Reds’ rescue late in the day.

The Uruguayan, who had hit the post and had two penalty appeals turned down, found the net after Daniel Agger’s header had come back off the crossbar. The hosts pushed for a winner, but couldn’t pick up all three points. Gerard Houllier returned to Anfield as Villa’s manager, but Roy Hodgson’s side ensured it was a miserable return to his former club for the Frenchman.

Liverpool were without key players Gerrard and Fernando Torres, but still cruised to an easy win. David Ngog and Ryan Babel, not two of the most popular players to have played for the Reds, both scored early to put their side in control at half-time.

Maxi Rodriguez added a superb third early in the second half, finishing brilliantly after good work from Ngog. The 2009/10 season was meant to be the year Liverpool won the Premier League, having pushed Manchester United so close in 2008/09, but Villa ensured Rafa Bentitez’s side continued their poor start to the campaign.

Ashley Young’s free-kick deflected wickedly off Lucas to give Martin O’Neill’s team the lead, before Curtis Davies’ header doubled their advantage just before the break.

Torres gave Liverpool hope with a close-range finish with less than 20 minutes remaining, before Young converted a penalty, awarded after Gerrard fouled Nigel Reo-Coker, to put the game to bed. The 2008/2009 season was arguably Liverpool’s best ever Premier League campaign, and their destruction of Villa nearly five years ago was an absolute joy to watch.

With United having slipped up away to Fulham the day before, Benitez’s men knew a win would crank the pressure up on Sir Alex Ferguson’s side. They duly obliged.

Dirk Kuyt and Albert Riera both emphatically found the net to put the Reds 2-0 up in no time, before Gerrard’s penalty virtually had the game won at the interval.

The skipper added a free-kick and a penalty, which saw Brad Friedel sent off for bringing down Torres, to complete his hat-trick on a fantastic afternoon for Gerrard and his teammates.