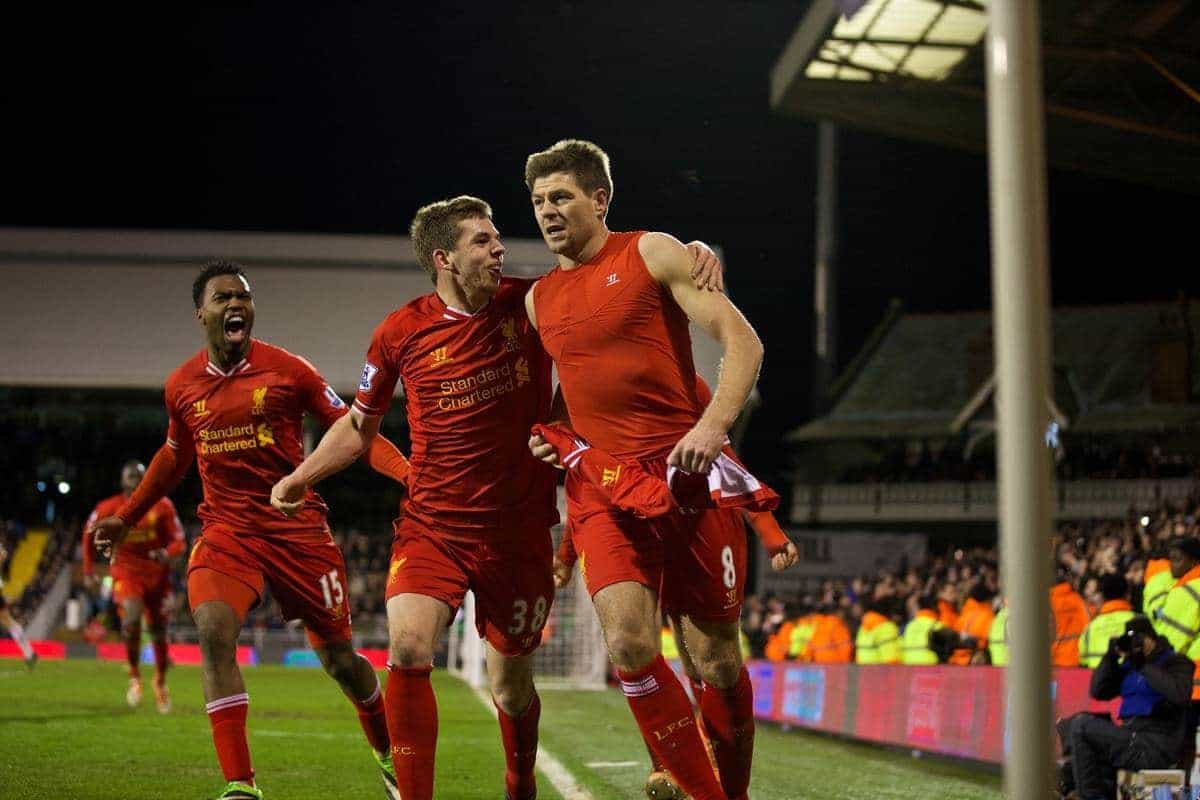 Liverpool twice came from behind to see off Fulham in dramatic circumstances – Steven Gerrard’s injury time penalty claiming all three points for Brendan Rodgers’ side. This was as dramatic as Yossi Benayoun’s winner on this same ground in 2009. The Israeli’s goal five years ago at Craven Cottage kept Liverpool in a title race and Gerrard’s winning penalty on Wednesday night has arguably put Liverpool in one.

Gerrard produced a man of the match performance to drag Liverpool to victory.

Shortly before half-time, the Reds’ captain had produced a stunning ball to put Daniel Sturridge in for the equalising goal; Sturridge becoming the first Liverpool player to score in seven consecutive Premier League games.

That goal cancelled out Kolo Toure’s Djimi Traore-esque own goal as Liverpool struggled in the opening half hour and Fulham won individual duels all over the pitch to put Brendan Rodgers’ side under pressure.

1-1 at half-time was perhaps harsh on the home side, who had enjoyed the better of the opening 45 minutes.

It was another error in defence that gifted the home side the lead after the break – Martin Skrtel producing the error for Kieran Richardson to poke home from close range.

That goal though was completely against the run of play, with The Reds dominant after the break, Luis Suarez hitting the post.

Philippe Coutinho‘s deflected shot from the edge of the box then pulled Liverpool level shortly after.

Rodgers handed youngster Joao Carlos-Teixeira his debut and Gerrard pushed on as Liverpool went searching for a late winner.

It arrived in the 91st minute; Sturridge was fouled inside the area and Gerrard kept his cool to convert the penalty and send the travelling Reds wild in the Putney End.

The announcement that there will be no trains back to Liverpool from Euston Station tonight could hardly been heard as the travelling Reds celebrated a dramatic win that perhaps has them dreaming. “We are Liverpool tra la la la la” filled the cold, windy skies in West London.

The result puts The Reds just a point behind Manchester City, whose game tonight was postponed, and four behind league leaders Chelsea.