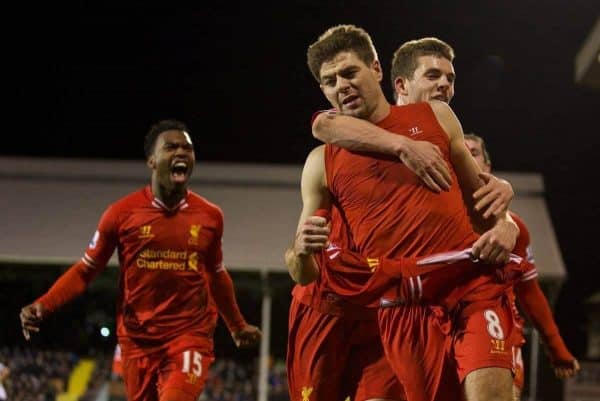 After coming back from behind to win for the first time this season, Liverpool showed a new resolve in their 3-2 win at Fulham on Wednesday night, explains Joseph Copeland.

You will never know the true character of somebody until you see them at their most vulnerable. When their backs are against the wall and things look most bleak, do they succumb to the moment? Or do they brush themselves off, and get on with the job? That’s how winning is done.

It’s not always going to be a Sunday stroll; there will always be obstacles to overcome. For Liverpool Football Club, they just passed one of their toughest challenges to date.

A look at the final score line from Craven Cottage, 3-2 to Liverpool, does not give the performance its just do. Twice the Reds were pegged back by a surprisingly stout Fulham side, and twice they found their way back.

Where most teams could have folded up shop, happy to escape with a draw, Liverpool, egged on by their boisterous boss on the touchline, pushed and prodded for that all elusive winning moment that would send the traveling faithful into glorious rapture.

That moment arrived in the 90th minute when Daniel Sturridge solidified yet another terrific performance by winning a clear penalty following a nice build up.

Was there ever a doubt that Steven Gerrard would not put that penalty in? His confident finish saw the Captain erupt with a roar before waving his shirt like a madman, as if he were a fan himself.

That moment might best personify the magnitude of tonight’s result. This could be one of those landmark games that you look back on and say, “Yes, that’s where things turned around for us.”

When Liverpool is firing on all cylinders, they are an absolute joy to behold. There is wonderful, intricate link up play, endless pressure on the ball and of course, there are goals aplenty.

It’s easy to play with confidence and swagger when you’re rolling along at 2-0-, 3-0 or 5-1. The real test of a team’s title credentials (Yes, Liverpool are in the title hunt) are shown in games like we saw on Wednesday.

Champions League places and League titles are won in places such as Craven Cottage, the Midlands, the Hawthorns and on trips to Wales. We know Liverpool is capable of raising their level for the big games.

Just look at the demolitions of Arsenal, Everton and Tottenham as well as battling defeats versus Chelsea and Manchester City as prime examples.

However, it’s fair to surmise that Brendan Rodgers learned more about his team following the instant classic with Fulham, than he ever could in those dazzling displays.

In recent years, this is a game that Liverpool might very well have let slip, but this is a different team, with a brand new attitude.

This is a side brimming with confidence that feels like they are always in a match regardless of how dire the situation may appear to be. Being able to boast players such as Luis Suarez, Sturridge, Gerrard and Co. would put many people’s minds at ease.

This has been baptism by fire for what is still a young team that is growing together. Enthralling fight backs like the one against Fulham will only see the belief in their manager, and each other continue to blossom.

That continuity is something that cannot be bought, it has to be earned. It is a sign of the culture change that is taking place at Anfield under the Rodgers regime.

This fighter’s mentality goes well beyond the pitch on match day. The energy around the club has been magnificent.

From the Head of Recruitment, Dave Fallows, to the team Physiotherapist Chris Morgan, to the players starring on the field, there is a renewed commitment to the cause.

It might have taken 20 months into his reign at Liverpool, but Rodgers might finally have broken through to his players and staff.

In sports, it is widely believed that a team must first face a multitude of tribulations and suffer through gut-wrenching encounters before they can truly reach the summit.

Well, Liverpool has plenty of experience in that department over the last few seasons. It’s high time they started feeling what it’s like on the other side of the spectrum, to be wholly tried and tested, but still come out victorious.

While there is still work to be done, the signs are positive that Liverpool seems to have rediscovered what it means to fight for the shirt and not the name on the back.

You almost felt like a parent watching your child age in rapid time while watching Liverpool scrap past Fullham.

This team is in the unusual position of competing for high honours while still trying to learn how to win. That they now sit only four points off the top of the table through 26 games is a testament to their character and outstanding talent.

There is no doubt more gruelling tests are forthcoming, but it would appear that this team is finally embracing those moments and seizing their opportunity at glory, because after all, that’s how winning is done.