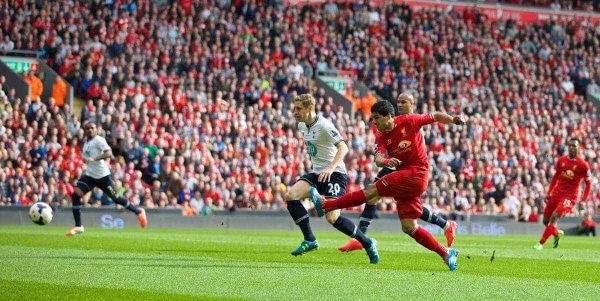 Liverpool went top of the Premier League with a yet another sensational performance at Anfield, trouncing Spurs in the process. Henry Jackson (@OnFootballTweet) rates each Reds player on the day. The Belgian did absolutely nothing wrong throughout, and was rarely troubled. The 26-year-old is enjoying a very solid run of form, and produced decent saves from Nabil Bentaleb and Christian Eriksen when called upon.

After a poor game against Sunderland, the 29-year-old produced an excellent performance. He showed great desire going forward, setting up the first goal, and was good defensively too.

Dealt with Roberto Soldado with ease, and was very good yet again. Liverpool’s best defender this season.

Barring one worrying lack of pace against Soldado, the Dane was very reliable. His use of the ball was excellent as always, and his partnership with Skrtel is looking somewhere near back to its best.

The 21-year-old hasn’t been at his best in the last few games, but he was rock solid against the north London side. Not always the best on the ball, but showed class and awareness in the lead up to Phillipe Coutinho’s goal.

The skipper was more unnoticed than some of his teammates, but he was still the heartbeat of the side yet again. Got stuck in, never lost the ball and generally led like the great captain he is.

The 23-year-old may have missed a great opportunity to score in the second-half, but he was everywhere for his side. The midfielder’s box-to-box style is often underrated, but he has been absolutely vital to Liverpool’s success this season.

After a Man of the Match performance against Sunderland on Wednesday, the Brazilian was majestic yet again. His balance and creativity was sensational, and he capped off a wonderful display with a fine finish. Received a standing ovation when substituted.

RAHEEM STERLING- 9 (Man of the Match)

The 19-year-old was magnificent on his return to the side, adding pace and skill to the side in abundance. The winger was hugely effective both on and off the ball, and played a key role in his side’s opener. A potential superstar in the making.

The Englishman had one of his quietest games of the season, but in fairness he was due one. He always showed willing running and nice touches, but for once it wasn’t the 24-year-old who made the headlines. Almost scored with an outrageous back-heeled effort in the second-half. Yet another wonderful display from the best player in the Premier League, if not the world, on current form. Produced a brilliant finish with his left foot to put Liverpool two goals up, and his touch, vision and work-rate was sublime right from the off.

The Welshman added calm and quality to the midfield, and is playing with more belief by the game.

The Brazilian was solid, and had an easy runout when he came on.

Had little time to make an impact.

Who was your Liverpool Man of the Match? Where do you agree/disagree with the ratings?