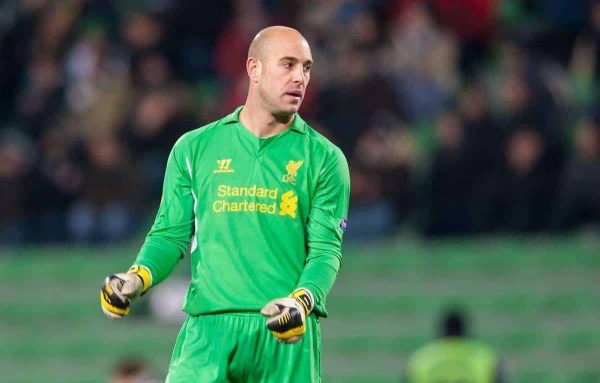 With a number of Liverpool currently on loan at other clubs, Jack Lusby (@LusbyLatest) predicts who will return to the club this summer, and who is on their way out.

This week, Brendan Rodgers expressed his delight at the development of loan stars Fabio Borini and Suso, as reported by James Pearce of the Liverpool Echo.

Liverpool currently have over a full XI out on loan and whilst some, such as Borini and Suso, can expect to come back into the fold next season, many will be considering their options.

Once considered an untouchable stalwart between the Anfield woodwork, the stock of Pepe Reina has fallen significantly of late.

At Napoli, the Spaniard’s form has taken a nosedive, keeping only five clean sheets in 19 appearances; statistics courtesy of Squawka.

VERDICT: Reina will be sold in the summer, with Atletico Madrid looking the most likely suitors at this moment in time, according to TalkSport. OUT.

McLaughlin is unfortunate to find himself low down the pecking order at Liverpool, with Jon Flanagan, Andre Wisdom, and Martin Kelly seemingly ahead of him.

His move to Barnsley presents an opportunity to impress in a competitive league in order to force his way into the immediate thoughts of an on-looking Rodgers.

VERDICT: McLaughlin will likely return to Liverpool and, with the club possibly participating on more fronts next season, may be offered some first-team action in some form next season. IN.

Having already performed admirably under Rodgers in his first season in charge, Wisdom’s loan move was a surprise when announced, as reported by BBC Sport.

So far this season, Derby have managed eight clean sheets and, according to Squawka, Wisdom boasts a take-on success rate of 79 percent.

A powerful mix of physicality, agility and defensive intelligence, Wisdom will surely play a significant part within Rodgers’ future plans.

VERDICT: Wisdom is nearly nailed on to return to Liverpool this summer and could understandably have designs on the possible right-back void left by a departing Johnson. IN.

Always considered one for the future, 21-year-old Portuguese centre-back Ilori never really featured for the Reds’ U21’s side before being shipped off on loan to Spanish club Granada.

Ilori has proven his worth in his two appearances for the La Liga outfit so far, not least with a majestic long-ball assist in a 1-0 win over Real Betis.

VERDICT: With Liverpool’s current centre-back issues, Ilori is likely to return to Anfield for next season, and could well play a part in the first-team alongside Mamadou Sakho. IN.

Bursting onto the first-team-scene alongside Jon Flanagan under Kenny Dalglish, Robinson was once considered the more talented prospect.

Now at Blackpool, Robinson is impressing under now-manager Barry Ferguson, and could well follow Flanagan into the Liverpool first-team in seasons to come.

VERDICT: With Rodgers seemingly unconvinced with Aly Cissokho and Jose Enrique, Robinson may return to Liverpool next season, if so as back-up to a long-term signing. IN.

Local-lad Coady was once regular captain of Liverpool’s U21’s side, and even featured once in the Europa League and made a subs appearance in the Premier League in the 2012/13 season (via WhoScored).

Now 21, Coady has reached a crossroads. Whilst performing well on loan at Sheffield United it could be argued that his next season will be make-or-break, with it more likely that he has now found his level.

VERDICT: To be sold; a permanent move to Sheffield United would benefit all parties. OUT.

Another player at a crossroads; having never featured for the Liverpool first-team, Adorjan could well be considering his options soon enough.

Currently featuring for Eredivisie side FC Gronigen, Adorjan has scored three goals in fifteen appearances, as per WhoScored.

VERDICT: Much like Coady, Adorjan will surely move soon enough; according to Transfermarkt, Gronigen have an option to buy that may well be exercised. OUT.

One of, if not the, most promising young players currently on Liverpool’s books, Ibe has a bright future ahead of him.

A skilful winger with great physical ability, Ibe has time on his side and will surely follow Raheem Sterling into the Liverpool first-team.

VERDICT: With Liverpool likely to be competing on more fronts next season, and Ibe having featured for Rodgers already, the London–born winger will surely appear regularly for the Anfield club next season. IN.

Enjoying a fruitful loan period in La Liga, Suso currently has seven assists in 24 league appearances for Almeria, according to Squawka.

With current first-team play-maker Coutinho suffering regular dips in form, Rodgers may benefit from having Suso as a back-up option next season; whether the young Spaniard will accept this is another matter entirely.

VERDICT: A spectacular talent with a questionable attitude, Rodgers should seek to secure and nurture Suso within the first-team next season. IN.

A mystery signing, Moroccan winger Assaidi has unfortunately been an enigma under Rodgers.

Whilst impressing on loan at Stoke City this season, with three goals in 16 appearances, as per Squawka, it is likely that his future lies away from Liverpool.

VERDICT: An undoubtedly talented player, Assaidi is the victim of circumstance under Rodgers: he will likely be sold, with Stoke City surely amongst his suitors. OUT.

As Rodgers’ trusted former charge, the BBC Sport reported £11m signing struggled to find the net in his first season at Liverpool.

However, under Gus Poyet at Sunderland, Borini has proven himself an adept secondary striker, not least with a well-taken opener in the Wearsiders’ 3-1 League Cup final loss to Manchester City.

VERDICT: With Rodgers surely looking to expand his limited attacking options for next season’s campaign, the Ulsterman can look no further than this familiar face to supplement Daniel Sturridge and Luis Suarez. IN.

Do you agree with our verdicts? Which loanees should be playing for the Reds next season? Let us know in the comments section below.