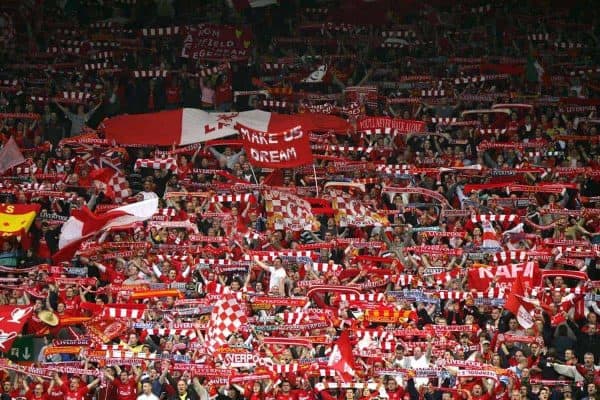 MAKE US DREAM: The quotes that prove Liverpool fans CAN help their team to glory

Liverpool have “eight Cup Finals” remaining this season – five of which are at home. The role of the Anfield crowd cannot be underestimated in what could be a historic end to the season. Make Us Dream.

Speaking ahead of Wednesday’s visit of Sunderland, Brendan Rodgers said:

“Hopefully the supporters can really get behind the team well before kick-off, get the atmosphere revved up for the game and we’ll look to continue on this great run.”

Rodgers, who was at Anfield in 2005 when the Reds overcame Chelsea in the Champions League semi-final, will no doubt be recalling the famous Anfield atmosphere that has inspired many a famous victory in the past, and could be vital in the run-in, giving The Reds the advantage.

Fans are often labelled the “twelfth man” but as these quotes below explain, the Anfield crowd really have played a key role in previous famous occasions.

The aforementioned win against St. Etienne, in a 1977 European Cup Semi Final, Second Leg is often attributed as one of the best atmospheres in the club’s history:

“For me it was the greatest atmosphere I ever played in. Older supporters will talk about the Inter Milan and Celtic games in the sixties, but there was no doubt in my mind that St Etienne was the best. There was a sense of anticipation about the game and it hit home when we heard that there were thousands of fans gathering around the ground early in the morning, never mind late afternoon. It was a real pressure game and the supporters played their part.

Here are more quotes that prove the power of the Anfield crowd, they speak for themselves:

One of Liverpool’s most famed atmosphere’s occurred in the Champions League semi-final, second leg against Chelsea in 2005.

“The atmosphere from the word go was electric and with the early goal everybody just seemed to explode at the same time. It was unbelievable the support they gave us and I think everyone who was at the ground on Tuesday will remember it for a long time.”

“That atmosphere was better than anything I’ve known and I’ve been involved in some great nights recently. The games against Roma, Juventus and Olympiakos were unbelievable, but that was something else…there’s none better than our fans or Anfield on a European night”

“At the end I felt like jumping in and celebrating with the fans. They’re the best in the country by a mile and I just hope they enjoy the final as much as they have this evening.”

“When I was coach of Valencia, we played Celtic in the UEFA Cup and the atmosphere was great but this was even better. I will never forget this game. It was good on television but when you are in the ground, hearing it, it’s fantastic.”

“I felt the power of Anfield, it was magnificent.”

“I have never heard anything like it before and I don’t think I ever will again. It is the best atmosphere I’ve ever played in.

“I walked out into that cauldron and heard that singing and saw that passion. The hairs on my arms were standing up. To see a spectacle like that is inspiring to anyone.

“I just kept looking around, trying to take it all in. I wasn’t daunted by it, but it was amazing. I wish more crowds were like that.

“Apart from the volume, it looked spectacular, too. In the seconds before the referee blew his whistle for the start of the match, the whole stadium let out this great long roar as if they were going to power Liverpool to victory.”

– John Terry, writing in his autobiography

“I have refereed at places like Barcelona, Ibrox, Manchester United and Arsenal. But I’ve never in my life been involved in such an atmosphere. It was incredible.”

“I love it when you step out of the dressing-room and you see the Kop, the scarves, and [hear people] singing You’ll Never Walk Alone. Just that, that would do it for me.”

“You could be playing against an average Liverpool team and it would still be one of the toughest games of the season, just because the crowd drive them on and the tradition between the two clubs.”

Fabio Capello, on atmosphere vs Juventus, 2005:

With five home games to go, including potential title-deciders against rivals Manchester City and Chelsea, Liverpool fans will be out in full force to provide more influence and inspiration for their team.