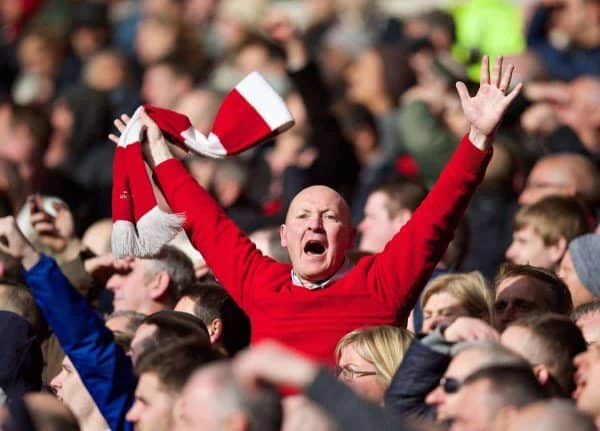 It was another resounding performance from Brendan Rodgers after a nervous first-half which had seen them have to scurry back from a goal behind twice to enter the break level.

Luis Suarez bagged a hat-trick, there was another brace of goals for Martin Skrtel, and Daniel Sturridge slotted home his 19th goal of the season.

The result means Liverpool stay second in the Premier League table, just four points behind leaders Chelsea, with a game in hand and Jose Mourinho’s men still to come to ‘Fortress Anfield’ next month.

Sunday morning’s papers are full of praise and admiration for Rodgers’ side, with their title credentials no longer being questioned — Liverpool are well and truly in this race.

Stuart James of The Guardian/Observer reported from the Cardiff City Stadium:

The Liverpool bandwagon rolls on. “We’re gonna win the league” reverberated from the travelling supporters after a sixth successive Premier League victory maintained Liverpool’s pursuit of a first title since 1990 and offered further evidence of their staggering firepower and ability to score almost at will.

Ken Gorman of the Mirror wrote:

Liverpool’s six-hitters had their fans dreaming as they ­steam-rollered gallant Cardiff to maintain their push for a first Premier League title.

The standout moment in the match came in the 59th minute when Sturridge played a back-heel pass, demonstrating an almost telepathic awareness of Suarez’s whereabouts.

It was a another fantastic performance by Suarez, Sturridge and Liverpool, but a sense of calm was maintained by both Rodgers and Suarez after the game — saying the focus is solely on Wednesday night’s game against Sunderland at Anfield than any title talk.

Meanwhile the statisticians of social media were out in force as Liverpool look to break all kinds of records:

#LFC were on the highway to the danger zone today. All goals from prime locations. pic.twitter.com/NchcDzUBPK

For the first time since the end of the 2005-06 season have #LFC registered 6 PL wins in a row. (@AnfieldIndex)