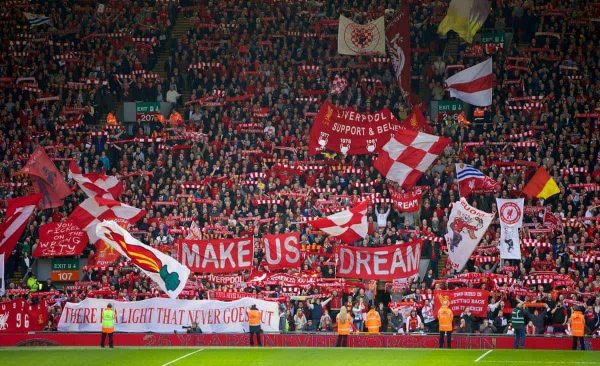 The most passionate ‘You’ll Never Walk Alone’ for years?

There was something quite special about Anfield’s rendition of ‘You’ll Never Walk Alone’ prior to Liverpool’s 3-2 victory over Manchester City on Sunday.

In anticipation of a massive game for Liverpool, fans welcomed the team to Anfield with a glorious display of banners, flags, scarves and songs as the team coach arrived down Anfield Road.

As the teams came out, ‘You’ll Never Walk Alone’ ringed passionately around the ground and Liverpool’s fans were in fine voice throughout.

From the Kop to the Centenary, Anfield Road End, Main Stand and Paddock, the supporters became the twelfth man as the Reds edged past their title rivals to cement their position as Premier League leaders with four games to go.

The atmosphere was electric from start to finish as goals from Raheem Sterling and Martin Skrtel gave Liverpool a comfortable 2-0 lead by half-time.

When David Silva and a Glen Johnson own goal allowed Man City back into the game, the Kop didn’t switch off and inspired by the crowd, Philippe Coutinho struck home the winner twelve minutes from time for a famous, important victory.

Manager Brendan Rodgers paid tribute to the fans after the game and also commented on the emotional occasion as the club approaches the 25th anniversary of the Hillsborough disaster.

He told Sky Sports, “It was a wonderful atmosphere. I’m sure it sounded loud on TV, but down on pitch-side it was incredible.

“There is always an emotive side around this time, people were wondering if that would affect us. But we live with that every day.

“The families and the victims of Hillsborough are with us every day, in our thoughts. It was an inspiration for us, rather than something that would hold us back.”

BT Sport are screening a documentary on the history of ‘You’ll Never Walk Alone’ on Monday night, starting at 10pm.

Watch a trailer for the programme here.

How important a role do the fans have to play in Liverpool’s fight for the Premier League title? Let us know your thoughts in the comment below, or on Twitter @thisisanfield.