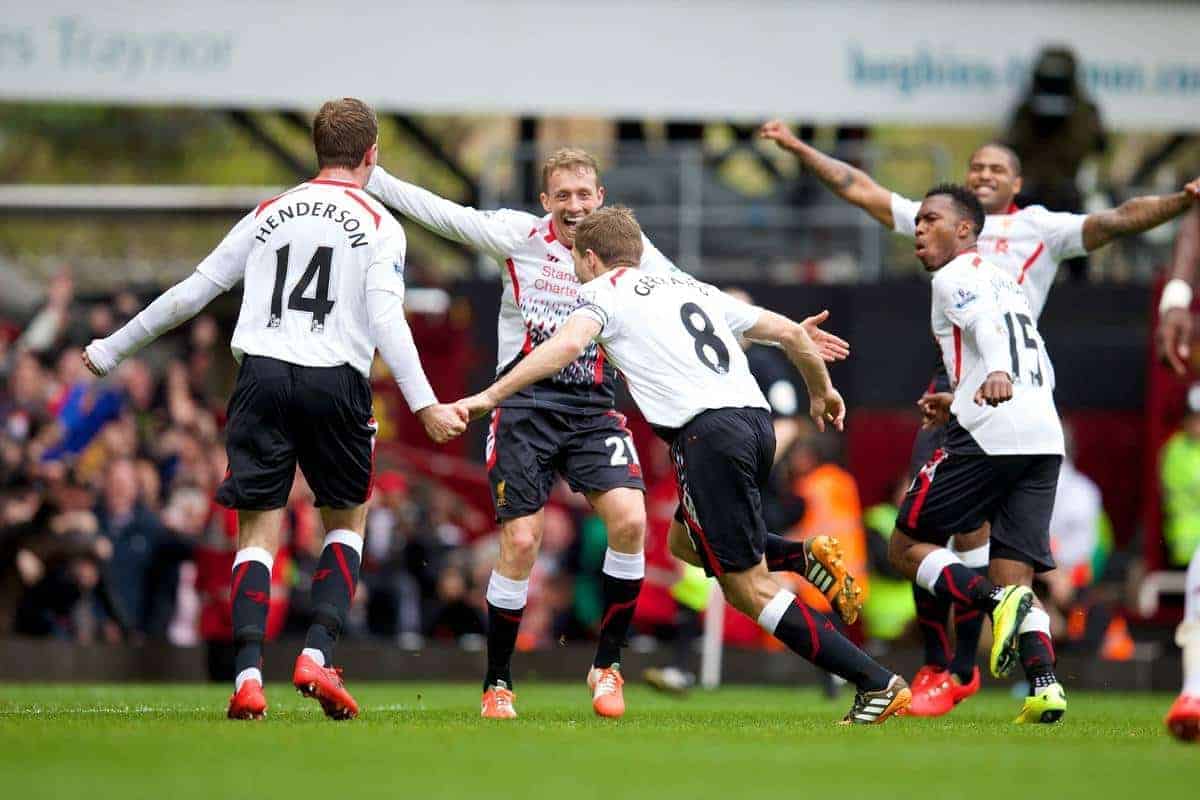 Liverpool produced a gritty performance to overcome Sam Allardyce’s side, as they went back to the Premier League summit. Two Steven Gerrard penalties made the difference, on a hugely controversial afternoon at Upton Park. Mamadou Sakho returned to the Reds side in place of the injured Daniel Agger, who picked up a knee injury during training in the week. Other than that, Brendan Rodgers made no changes to the side that thumped Tottenham at Anfield last weekend.

The game got off to a cagey opening, with West Ham making life tough for the visitors. Former Red Andy Carroll was a constant menace in the air, but Martin Skrtel and Mamadou Sakho remained resolute against the 25-year-old throughout.

Luis Suarez almost gave Liverpool the lead with an audacious chipped effort, only to see it come back off the crossbar, while Daniel Sturridge, quiet throughout, saw two efforts miss the target.

With the game drifting towards half-time, Steven Gerrard’s sublime pass found Suarez, who won a penalty following James Tomkins’ handball. The 33-year-old skipper coolly dispatched the spot-kick to score his 12th league goal of the season.

Just as it looked as though the Reds would go in 1-0 up at the interval, controversy struck. Carroll clearly obstructed Simon Migonlet in going for a high ball, but Guy Demel’s eventual finish was awarded as a goal.

The assistant referee had flagged for a foul, but referee Anthony Taylor overruled the decision, much to the fury of every Liverpool player. It was a hugely frenetic ending to a fairly low-key opening 45 minutes.

The second-half began with Liverpool bossing proceedings, but despite their superior possession they struggled to threaten Adrian in the West Ham goal. Carroll hit the bar with a bullet header at the other end, while Sturrudge fired over after typically brilliant link-up play with Suarez.

With 20 minutes remaining, Jon Flanagan was brought down by Adrian, and Liverpool were awarded their second penalty of the match. It was rather soft, but it made up for the atrocious decision for the Hammer’s goal. Again Gerrard converted, sending the travelling fans wild.

Sturridge shot straight at Adrian after fine work from Raheem Sterling, while another outrageous Suarez effort came back off the bar as Liverpool tried to kill the game off.

A tense final few moments saw the Reds see the game out, and the victory sees them return to the top of the Premier League table; two points clear of Chelsea and four ahead of Manchester City, who have two games in hand.

Liverpool haven’t done ugly wins this season, but this was as gritty and gutsy as a Rodgers side will ever look.

Rodgers deployed the 4-3-3 system rather than the 4-4-2 diamond used in some recent games. It did not work to great effect in first-half, and his decision to revert to the latter- Lucas replaced Philippe Coutinho at the break- paid dividends.

Close attention had clearly been paid to Carroll during the week, and both Skrtel and Sakho were outstanding from start to finish in dealing with him.