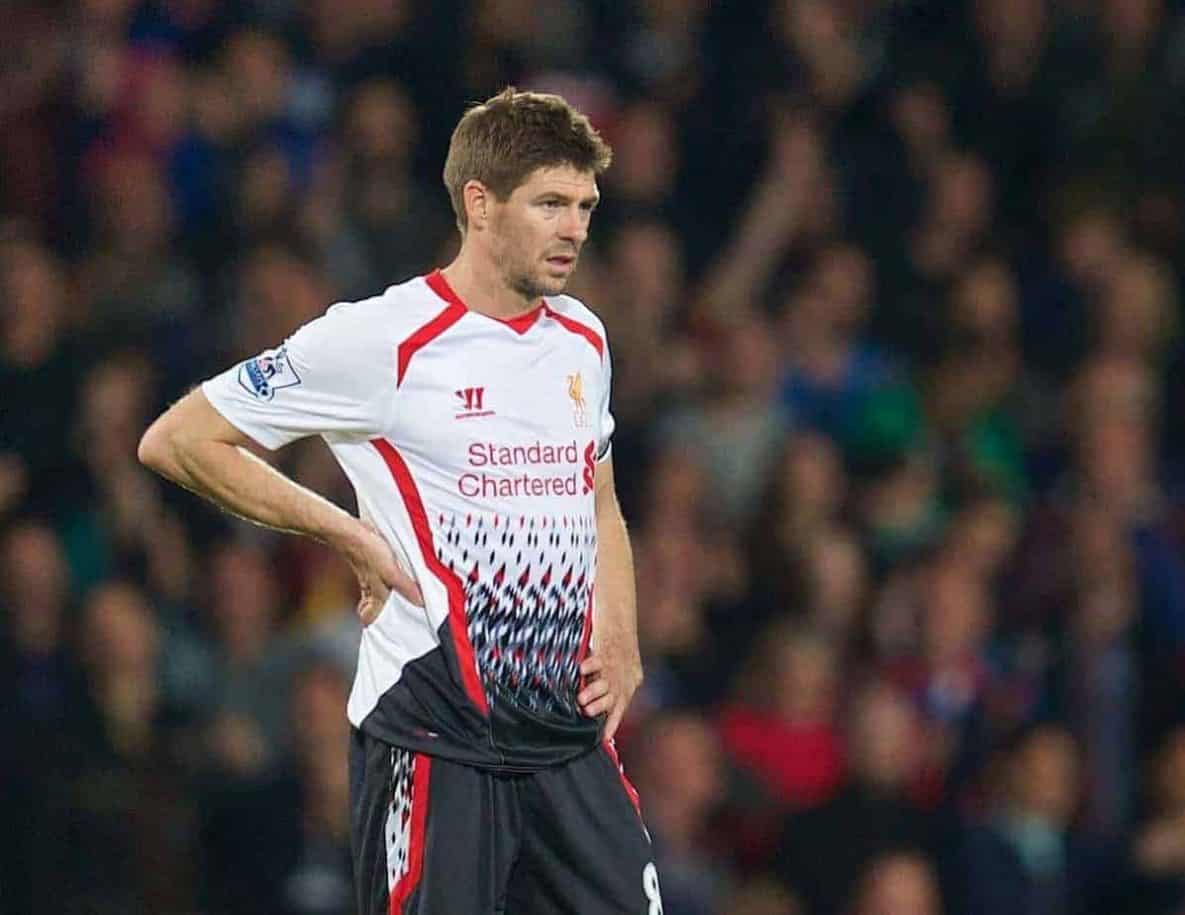 A capitulation of monstrous proportions left Liverpool reeling as Crystal Palace came back from 3-0 down to strike a hammer blow to the Anfield club’s title hopes. Here, Jack Lusby assesses the performances of Brendan Rodgers’ Reds.

Kept his side ahead with some fantastic saves, particularly in the first half; a reflex save to tip a Mile Jedinak piledriver over the bar was a highlight from what was a solid performance from the Belgian. Can’t be faulted for any of the goals.

Encapsulating his side’s performance, Johnson was one of Liverpool’s best players going forward as Rodgers looked to stick the knife in at Selhurst Park and ran left-back Joel Ward ragged, however unfortunately the England international played a huge part of the Reds’ defensive frailties in that last 10 minutes.

After the game, the 29-year-old took to Twitter to vent his frustrations at criticism leveled at him:

So many sofa experts in this game….
Absolutely no idea about football what so ever! #Jokers

Little to do in the first half, but Skrtel played a large part in Liverpool’s capitulation. Guilty of dropping way too deep into the box – as per the norm of late – and inviting pressure from the likes of Yannick Bolasie and Dwight Gayle.

Dealt with defensive issues well at the start of proceedings, and as per Squawka won three out of five headed duels, but as with Skrtel was at fault as the Reds fell apart as the game drew to a close.

Should have scored in the first half, instead burying his header into the ground and over the bar.

An unspectacular game from Liverpool’s rising star, coped well defensively and contributed with some clever overlapping runs as the Reds looked to unpick a tough Palace defence prior to the opening goal.

Determined to make amends for his costly slip against Chelsea the previous weekend, Gerrard was on solid form in his defensive midfield role.

Provided the assist for Joe Allen’s opener with a well-struck corner, and was involved in some intelligent build-up play as the England captain drove into more advanced positions to assert himself on proceedings.

Another ineffective performance from the Brazilian, who looks well out-of-sorts in his newly established advanced role in the Liverpool midfield.

Lacks the pace or tactical nous to impose himself in the attacking third, whilst his defensive abilities pail in comparison to the energetic Joe Allen.

Liverpool’s most effective performer throughout the night, Allen looks to be growing in confidence as he is allowed a run of starts in the absence of Jordan Henderson.

The Welshman showed some inventive movement as he slipped towards the back post to take the first goal, and elsewhere performed his defensive duties adeptly, whilst also making some astute passes into the box.

As per Squawka, the 24-year-old won 63 percent of his attempted tackles, made 5 key passes and had a passing accuracy of 88 percent.

Indicative of his rise this season, Sterling once again looked as much a part of Liverpool’s attacking trio as the more established Luis Suarez and Daniel Sturridge, and was a constant threat to the Palace defence.

Provided the assist as Suarez made it three on the night.

Out-of-sorts of late, Suarez looked near to his best against Palace as he twisted and turned his way to Julian Speroni’s goal, and was involved in some majestic attacking play; took his goal with consummate ease, taking his tally to 31 for the season.

Perhaps guilty of not tracking a rampant Bolasie back towards the Reds’ box for Palace’s second, and was a little profligate in front of goal, blazing three attempts high and wide.

As with Sterling and Suarez, was involved in some inventive build-up play, but Sturridge is clearly not quite at full fitness yet following his return from injury.

The England striker was guilty of being somewhat selfish as Liverpool looked to up the ante and dent Manchester City‘s goal difference after taking the lead.

Had little time to impose himself, and his substitution coincided miserably with Palace’s late dominance.

As Gary Neville attested on Monday Night Football, the wrong substitution; snatched at a golden opportunity to provide Liverpool with a late winner.

Do you agree with our ratings? Who was your Man of the Match? Let us know the comments below.