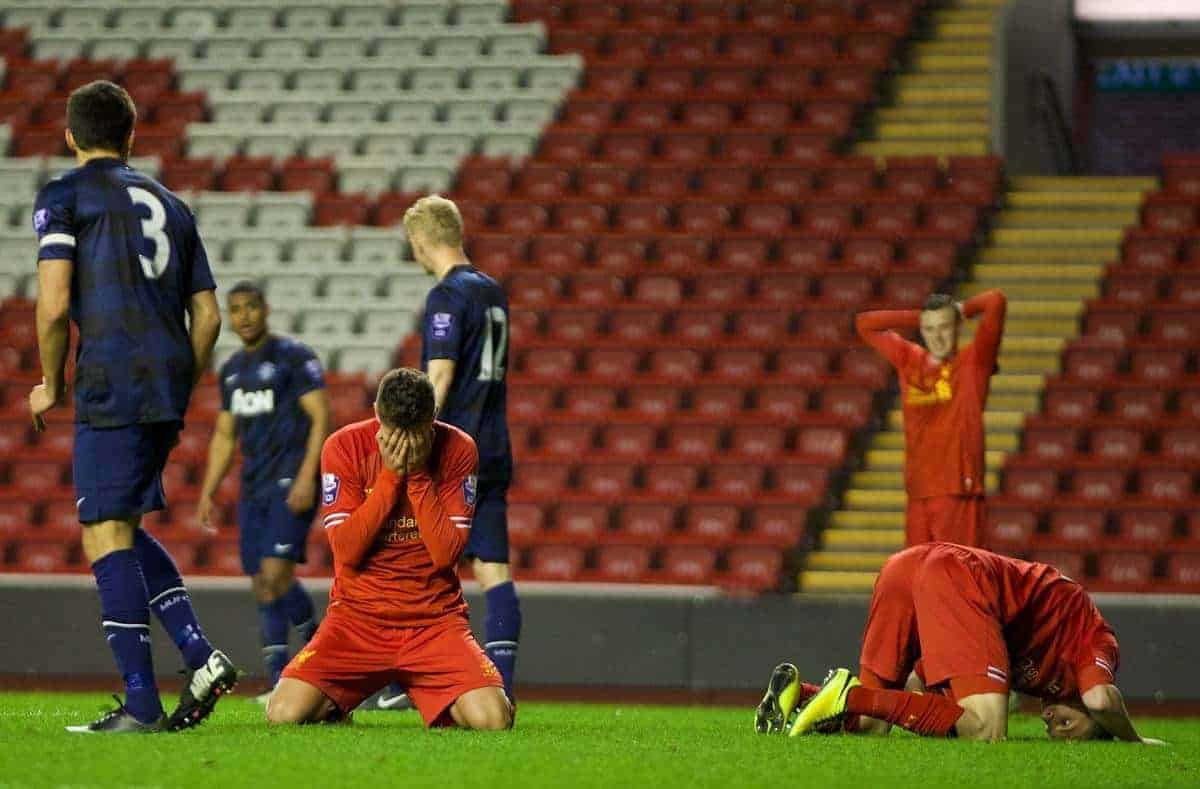 Liverpool crashed out of the under 21 play-offs as they suffered a 1-0 semi-final defeat against rivals Manchester United at Anfield.

A fantastic strike from Andreas Pereira two minutes before half time was enough to see the holders through to the final of the competition which they’ll defend against Chelsea.

The first chance of the game fell to United after just three minutes. A poor square pass from Brad Smith was intercepted by striker James Wilson on the edge of the Liverpool box, but he saw his composed effort bounce straight back off the post – an early escape for the Reds youngsters.

United continued to enjoy the better of the opening minutes, and after Saidy Janko burst past Smith down the right wing, he cut back to edge of the box where Joe Rothwell was poised but he fired into the Kop.

Liverpool responded with their first effort of the game with Jordan Lussey’s, but he fired wide after good work from Ryan McLaughlin, who joined the attack from right back, set the midfielder up for a shot at goal. Reds grew into the game and had a great chance to take the lead when Smith’s excellent cross picked out Kristoffer Peterson on the run, but the Swede headed high over the bar.

Both sides enjoyed spells in possession though chances were few and far between, but on the half hour mark United almost took the lead. An almighty goal mouth scramble broke out after Liverpool failed to clear a corner swung in at the near post and as the ball looked to be trickling over the line, Ryan Fulton managed to rescue it at the last to keep the score at 0-0.

The game looked to be heading into the break level but two minutes before half time United took the lead. Andreas Pereira was allowed too much time and space and after turning, he unleashed a fantastic curling effort from 25-yards which flew over Fulton and into the far corner of the net, handing the away side a half time advantage.

A scrappy start to the second period resulted in the Manchester outfit registering the first attempt of the half on goal, with Pereira trying his luck from distance again but this time Fulton produced an easy save.

Peterson had the chance to draw Liverpool level in the 56th minute, but after latching onto a short back-pass, his left foot strike lacked power and was straight at Ben Amos in the United goal. Rafa Paez was next to try and force an equaliser for the youngsters on the hour mark, but he couldn’t guide his header into the corner and Amos produced a simple save.

The Reds were struggling for a way to level proceedings as United defended deep and as they chased a way back into the match, the game opened up. The away side looked dangerous on the counter-attack and after a strong run, Tom Lawrence sent a curling effort agonisingly wide of Fulton’s far post. Only seconds later, Ben Pearson tested the Liverpool ‘keeper again but Fulton reacted superbly to keep out the United midfielder’s initial strike and follow-up effort.

With only five minutes left, Liverpool had a golden opportunity to draw level. After Lussey burst into the box and fired an effort on goal, Amos parried and substitute Villyan Bijev pounced on the rebound just 5 yards out from goal, but he somehow put his effort over the bar and into the Kop when he looked certain to equalise.

Inglethorpe’s side piled on the pressure and Teixeira went close in the final minutes as he fired his well struck snap shot wide of the far post. Moments later, Smith’s outstanding cross from the left was met by Bijevn again but his header was deflected over for a corner and ultimately came to nothing.

Five minutes was added at the end of the second half, but the Reds just couldn’t find a late equaliser despite Peterson going close with a header. United saw out a 1-0 win to book their place in the national final and knock the Reds out at the semi-final stage for the second year running.

Disappointing night for Liverpool U21s tonight to lose 0-1 Man United U21 in semi final. Been a superb season tho with many developing well