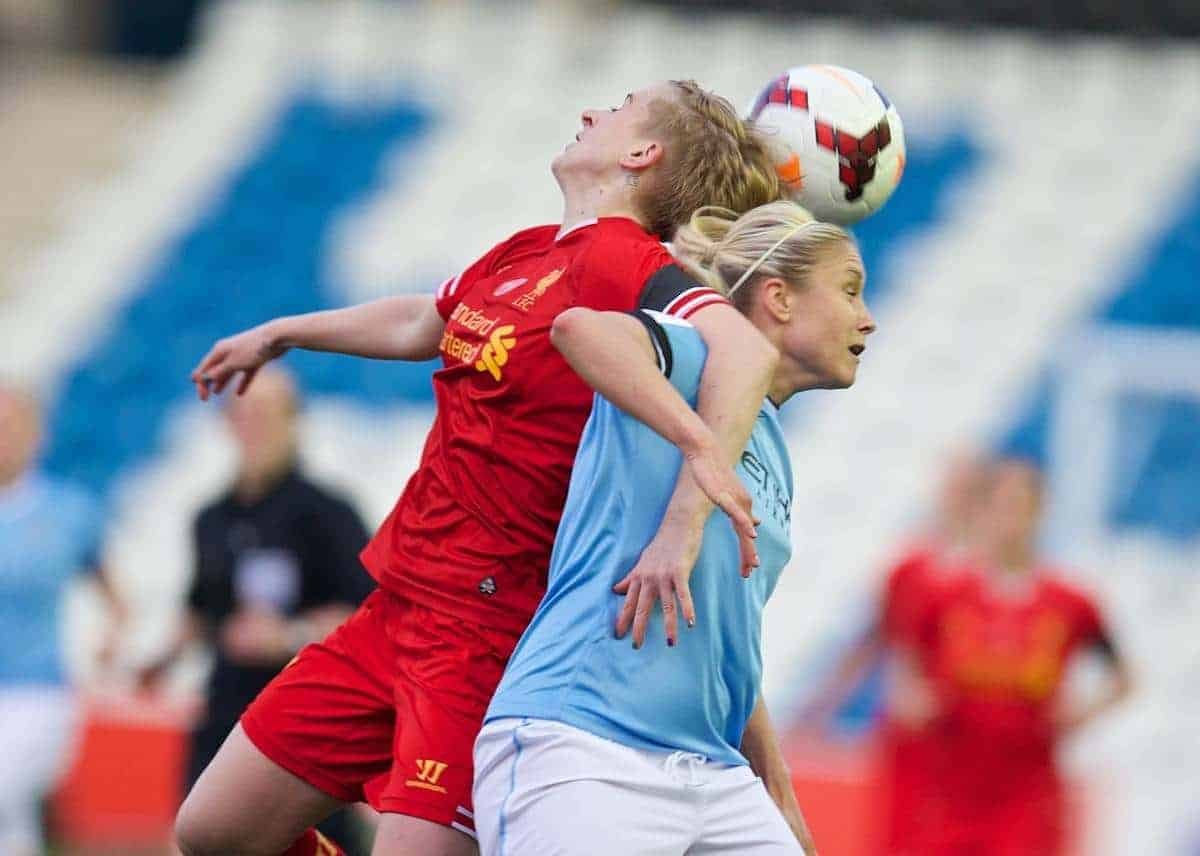 The 2014 season has seen a rather stumbling start for defending WSL champions Liverpool Ladies, writes Heather Carroll in April’s review.

It’s been a busy month for defending Women’s Super League champions Liverpool Ladies. As well as kicking off the defence of their league title, Liverpool progressed to The FA Cup Quarter Finals and played their first Continental Cup group game.

Before the season began, Liverpool lost three players to injury; Lucy Staniforth and Nicole Rolser will both miss most if not all of the 2014 campaign while Katie Zelem has been ruled out for two months with a broken collarbone.

Alongside these, Kate Longhurst, Libby Stout, Amanda DaCosta and Martha Harris have each missed games through injury. This has given chances for players from Liverpool’s development squad to step-up, with Ashley Hodson, Ellie Stewart, Claudia Walker, Megan Alexander and Hannah Dale all making their first-team debuts.

Liverpool’s 2014 season started with an away FA Cup tie with Sunderland Ladies who play in the new second tier of the Super League.

Despite losing Amanda DaCosta through injury the reds put in a good team performance, Martha Harris forced to play out of position but doing so with ease and opening the scoring after finishing well from a Kate Longhurst cross.

Natasha Dowie added the second after the Sunderland defence failed to clear Gemma Davison’s strike and confirmed Liverpool’s place in the quarter-finals.

Two weeks later and following a couple of league games, Liverpool hosted Everton Ladies for the quarter-final. Plagued by injury and without 6 first-team players, Everton started brighter and the teams went in at half-time with the reds losing 2-0 – Nikita Parris and Alex Greenwood the goal scorers.

A revived Liverpool side came out for the second-half with Gemma Davison working tirelessly on the wing and development squad striker Claudia Walker adding some much-needed fresh legs for the fast paced game.

Unfortunately for Liverpool there was no way through the staunch Everton defence and the reds crashed out a round earlier than last season.

Liverpool began their title defence at home to WSL newcomers Manchester City. Kate Longhurst controversially had her first half effort ruled out for offside after a dominating reds display, following this Liverpool lost their composure and allowed City into the game more.

In the second-half Natasha Dowie latched on to a brilliant ball forward from Lucy Bronze and finished well past Andrea Worrall to score the only goal of the game.

Just 3 days later Liverpool travelled to London to take on a Chelsea Ladies side that had been bolstered by a number of winter signings. Despite the terrible weather conditions the play was of a high standard between two sides many consider to be the best in the league.

Kate Longhurst and Libby Stout both suffered injuries during the games forcing substitutions, with youth player Ashley Hodson entering the fray in the first-half and not looking out of place – linking up well with Natasha Dowie.

Both sides in the end seemed to cancel each other out, the game finishing 0 – 0. Following the opening two games each of Liverpool, Chelsea and Notts County are holding up the top of the table with 4 points apiece.

As with the 2013 season, Liverpool’s Continental Cup campaign got under way with a home derby. Coming just 4 days after being knocked out of The FA Cup by the blues Liverpool were out for revenge and it showed.

Unfortunately for them the goals would just not come, Gemma Davison and Claudia Walker worked tirelessly down the wings with the latter playing her 3rd game in under a week.

Everton looked comfortable to sit back and defend to catch Liverpool on the break, almost succeeding with this plan when Nikita Parris forced Danielle Gibbons into a great save.

The first stage of the Continental Cup is a group stage; Liverpool’s next game in the cup is this coming Saturday again at home, this time against Sunderland Ladies.

Martha Harris also picked up the inaugural Women’s Young Player of the Year award for her displays last season for Lincoln Ladies.

Lucy Bronze walked away with the biggest award of the evening, the Liverpool defender winning the prestigious PFA Player of the Year award to complete an LFC double with Luis Suarez being named as the male Player of the Year.

May fixtures for Liverpool Ladies:

All Liverpool home games are free entry for those who hold Anfield season tickets, otherwise tickets are priced £5 adults and £2.50 concessions. Home games are played at the Select Stadium, Widnes.

Please follow @LFCladiesfans for news and updates for all upcoming games.