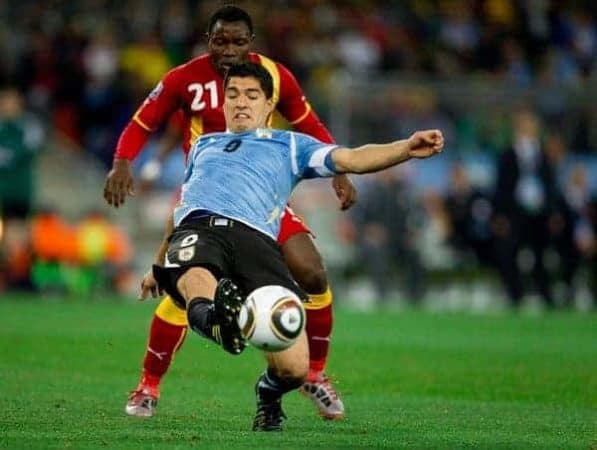 Uruguay’s 2-1 victory thanks to a brace of Suarez goals all but eliminated England from the World Cup.

Their fate was sealed by Costa Rica’s 1-0 victory over Italy on Friday, meaning Roy Hodgson’s side cannot progress from the group stage.

Although Rooney scored England’s only goal of the game, he had earlier headed onto the crossbar from Steven Gerrard’s deep cross to the back post.

“Apart from scoring the only English goal, Rooney headed one onto the crossbar and on another occasion, failed to beat the goalkeeper from close-range,” Maradona wrote in his Times of India column.

“It summed up the tale of the two strikers.

“While Suarez became a hero by converting two of the chances he got, Rooney capitalised on just one of the several he had, and that made the difference in the fate of the teams.

“Uruguay won because they were better in handling their scoring opportunities.”

Maradona also believes Liverpool captain Gerrard was at fault for both of Uruguay’s goals.

“For England, who dominated the second half but were let down by the final pass or the final touch, it was the same old story of what could have been,” he said.

“Gerrard and the English defence must take the blame for both Uruguay goals. When [Nicolas] Lodeiro started his run before the first, Gerrard could have done better.

“But Lodeiro passed it perfectly for [Edinson] Cavani, whose sublime cross eluded the central defenders and found an unmarked Suarez waiting joyously inside the box.

“It was Gerrard again who made a mess of a long shot from the Uruguayan goalkeeper after England had equalised. The ball went to Suarez, who once again found a lot of room in the penalty area before unleashing a ferocious shot.”

What do you think of Maradona’s comments? Fair or harsh on Rooney and Gerrard? Let us know your thoughts in the comments below.