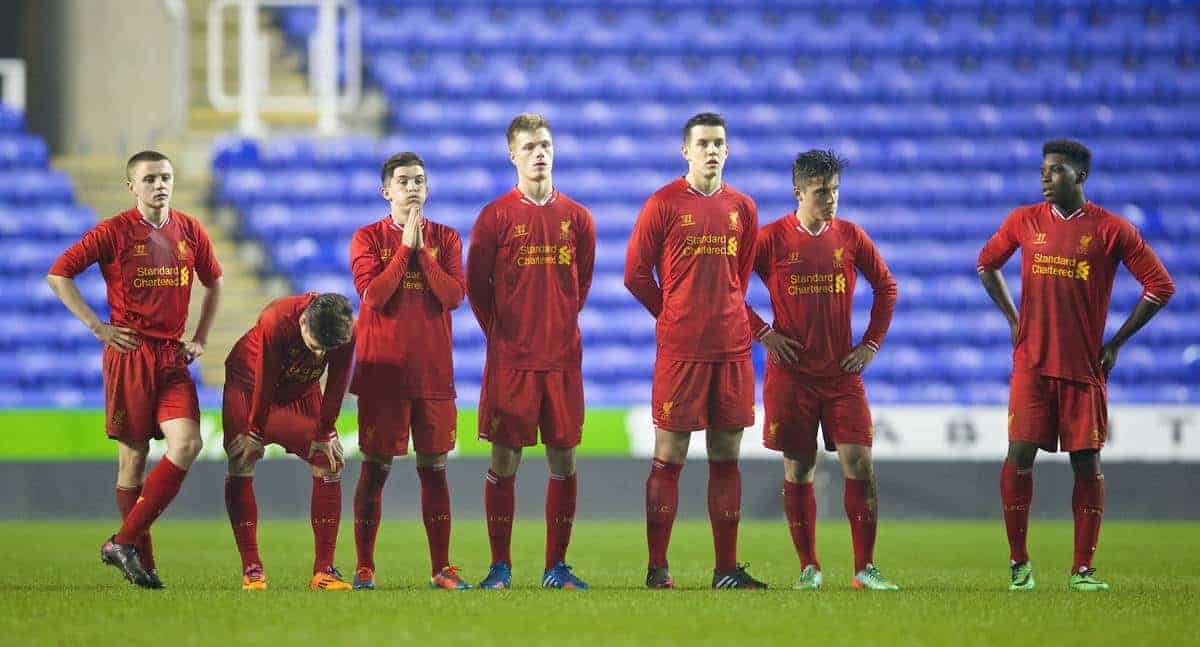 With the 2014/15 season already looming, Jack Lusby selects his 10 youngsters who can impress for Liverpool this pre-season.

Pre-season is, naturally, an opportunity for managers and players alike to formulate their plans for the upcoming season—for managers this includes pruning and adding to the squad, and players staking their claim for said inclusion.

For Liverpool, pre-season friendlies in July and early August—both home and away—offers a plethora of younger players the opportunity to impress manager Brendan Rodgers.

Players who have featured at the World Cup will be afforded more of a break, missing friendlies against Brondby and Preston North End, along with the beginning of the Reds’ tour of the USA.

This leaves Rodgers with a squad of kids in America, and here are 10 Liverpool youngsters who can impress this pre-season.

Nine appearances on loan at Championship side Barnsley saw McLaughlin his first competitive league experience, and the Northern Irish full-back could look to take this into Liverpool’s pre-season fixtures.

Doubts over the long-term future of Glen Johnson at Liverpool persist given his abysmal form, and this pre-season could see McLaughlin given the chance.

Likely to vie with more established players such as Jon Flanagan throughout pre-season, McLaughlin has his work cut out for him, but a solid pre-season may force the 19-year-old into Rodgers’ thinking.

Australian-born left-back Smith made his Liverpool debut in perhaps the most ill-advised of fashions.

With the Reds trailing 2-1 to Chelsea at Stamford Bridge in December, Rodgers introduced the then 19-year-old to Premier League football amid the harshest of atmospheres.

Incredibly pacey with a predilection for making forward runs, Smith impressed in the post-season friendly win over Shamrock Rovers in May, particularly within his link-up play with fellow Academy hotshot Jordon Ibe.

Targets including Alberto Moreno would surely oust the Englishman for any first-team capacity for 2014/15 if they were to join, but this pre-season is the time for Smith to impress his manager. An impressive loan spell at Derby County last season saw Wisdom unwittingly usurped as flavour of the month on Merseyside due to the full-back exploits of Flanagan, but returning full of confidence pre-season should see the solid defender keen to prove himself.

The 21-year-old helped the Rams keep 12 clean sheets in 37 Championship appearances throughout 2013/14, with the side unfortunately falling at the last hurdle in terms of promotion.

Whilst the defender operated as right-back last season, many believe that Wisdom’s long-term future lies at the heart of the defence, at centre back – a position he played last pre-season against Preston.

This pre-season Wisdom may be given the chance to impress in that role. Flirting with the Reds’ first team at times throughout 2013/14, young midfielder Rossiter signed his first professional contract with Liverpool on reaching his 17th birthday in May.

Speaking at the time, U21s boss Alex Inglethorpe was full of praise for the teenager, saying “He’s getting better all the time.”

Compared to a young Steven Gerrard, Rossiter is clearly in the thoughts of Rodgers for the future, and this pre-season may see the midfielder given the chance to impress at a higher stage.

U21s top scorer Dunn introduced himself to the Reds faithful in style, notching shortly after being introduced in Liverpool’s friendly win over Shamrock Rovers.

With one goal in one senior outing so far to his name, Dunn can surely look forward to more of an involvement under Rodgers in the near future.

Likely brimming with confidence, perhaps this pre-season is Dunn’s time to shine.

18-year-old midfielder Brannagan was linked by The Independent with a move to Spanish giants Barcelona this summer, perhaps a clear testimony to the quality of this youngster.

“Brannagan [is] a midfielder with the potential to be a top player, owing to his balance, vision and his ability with both feet,” they explained.

Included on the bench for Liverpool’s 2-0 FA Cup Third Round victory over Oldham in January, Brannagan is knocking on the door when it comes to first-team opportunities.

If included this pre-season, the midfielder will surely be looking to stake his claim under Rodgers.

A calm influence, seemingly completely unaffected by the occasion, Teixeira helped the Reds secure the penalty which led to their victory.

Pre-season will give the midfielder an opportunity to stake a claim for first-team involvement throughout 2014/15, particularly given the absence of players such as Adam Lallana, Raheem Sterling and Jordan Henderson for periods.

Ibe represents Liverpool’s most singularly talented youth prospect yet to break through into the first team proper, and many believe 2014/15 will be his year.

Impressive cameo appearances here and there–punctuated by an enduring presence for Inglethorpe’s U21s—culminated in a star show against Shamrock Rovers in May.

A pacey, skilful winger with great strength and a robust engine, Ibe should be ready to impress much like fellow Academy product Sterling, and this pre-season should be just the start.

Despite being considered one of the Reds’ star youngsters in recent years, Spanish midfielder Suso is at somewhat of a crossroads, with much speculation surrounding a move away from Merseyside.

Therefore, if the former Almeria loanee wishes to make a lasting imprint in the thoughts of Rodgers for next season, this build-up should be the right opportunity.

Pre-season with Liverpool may be make or break for Suso.

The oldest player in this list, Italian striker Borini warrants his inclusion due to his precarious situation at the club—much like that of Suso.

However, the striker has shown his determination to contribute for the Reds next season in bizarre fashion.

No one can question the Italian’s commitment to the cause, and an impressive pre-season could see Borini re-enter the first-team fold under Rodgers.

Which of these players would you most like to see this pre-season? Let us know in the comments below.