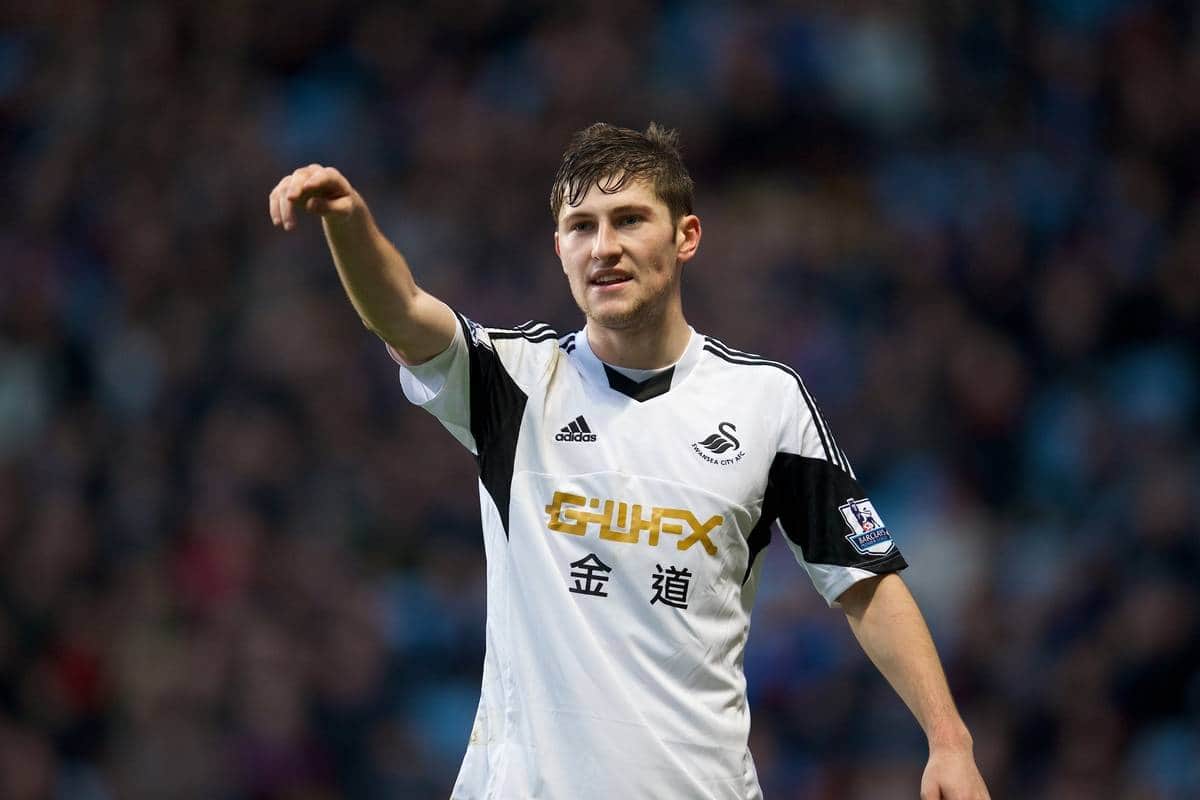 With Liverpool increasingly linked with a move for Swansea City’s Ben Davies, Jack Lusby believes the 21-year-old would be a great long-term left-back solution for the Reds.

As Brendan Rodgers continues his search for a new left-back as part of an ever-evolving squad, reports have perhaps unsurprisingly linked the former Swansea City boss with another former player.

The Telegraph writes that “Rodgers is weighing up a raid on his old club to solve what has proved a problematic position. Both Liverpool and Spurs are prepared to meet the £10 million valuation for the Wales international.”

#lfc are considering a bid for Swansea left-back Ben Davies after making an inquiry this week. #thfc also remain interested

The Daily Mirror even suggests that a renewed move for Sevilla’s Spanish full-back Alberto Moreno will have no effect on a move for the Welshman, claiming the club “may take both.”

The signing of Davies would represent a long-term solution for what has proved a problem area for some time, dating back to the days of Paul Konchesky.

The last truly great natural left-back to grace Anfield for the Reds was Brazilian Fabio Aurelio, a player dogged by persistent injuries.

Swansea’s 21-year-old star could finally stop the gap for Rodgers.

It is safe to say that many of Swansea’s hugely impressive performers from Michael Laudrup’s successful first season in charge suffered a sophomore slump in 2013/14.

Regular performers such as Spaniards Michu and Chico Flores failed to live up to the reputations built in the previous season, and the Swans finished 12th, nine points from the relegation zone.

Along with another reported Liverpool target, Wilfried Bony, Davies was one of the players under Laudrup, and later Garry Monk, who impressed on the Welsh coast.

The 21-year-old made 34 Premier League appearances, scoring two goals and making one assist.

Davies had an impressive game, in particular, in the side’s 2-1 loss at home to Arsenal in September, capping his performance with a well-taken volleyed goal.

If Swansea’s season can be considered one to forget for many reasons, Davies’ second season as a member of the first team was an encouraging one.

Great feeling to get 3 points! Nice to get a goal too! Lets kick on from here ? pic.twitter.com/DXRgRuKWwk

Davies, at such a young age, is a remarkably well-rounded defender.

According to WhoScored, the Swansea man made 2.2 tackles and 1.9 interceptions per game on average last season, displaying abilities of both defensive solidity and perceptive reading of the situations.

Furthermore, within the intrinsic, passing-based systems of the Welsh club, Davies has developed a canny ability to retain possession, with an average passing accuracy of 84.3 per cent impressive for a full-back.

In other news, #LFC now linked to Ben Davies of Swansea. Compared to recent link Bertrand, I can see more logic here pic.twitter.com/0Zq0KuhbDI

These statistics, comparing the pair with another recently reported target, Chelsea’s Ryan Bertrand, show Davies to be a well-rounded option for Rodgers at left-back.

Making a tackle or interception every 20 minutes on average leaves the 21-year-old as defensively similar to his Liverpool counterpart, whilst an average of 114 minutes per foul shows a discipline in the Welshman that is yet to feature in Flanagan’s game.

Furthermore, Davies is both more effective both in terms of creating chances and finishing them, and is also comfortable taking the ball up the flanks.

At just 21 years old, the Welshman’s strengths are many.

As such, it is difficult to find a genuine weakness in Davies’ game.

However, in the context of a short-term fix for the Reds, the Welshman still as a long way to go in his development before any claims to top quality can be made.

Like Flanagan, the Swansea man is a solid performer, and has proved himself over the last two seasons with the Premier League side, but these talents still require nurturing.

That this is the 21 year old’s main weakness—if it can be labelled such—should provide Liverpool fans with great assurance for the future.

Where Davies Would Fit in at Liverpool

If the Reds were to sign Davies this summer, the Welshman could slot into the side immediately, and performances since his 2012 debut have proven his Premier League credentials.

Davies, and potentially also Moreno, would allow Rodgers to shift Flanagan into his more natural right-back role, where the Englishman could contend with Glen Johnson.

This would provide the Liverpool manager with a plethora of assured full-back options, allowed for rotation and providing for inevitable injuries, suspensions and tired legs.

The Swansea man would flourish under his former manager’s guidance, with all the right tools at present, and his abilities both in defence and in moving forward into the attack would suit the Reds’ system adeptly.

As Flanagan showed last season, youth is no marker for ability and confidence within this side, and there is no reason why the pair of 21-year-olds couldn’t be lining up on opposite flanks for the Reds next season.

Both proven Premier League performers, both with experience of European competition, Davies and Flanagan would complement the defensive solidity of players such as Mamadou Sakho and Martin Skrtel perfectly.

Signing Ben Davies could see Liverpool tie down their full-back positions for the next decade.

Would Ben Davies be a good signing for Liverpool? Let us know in the comments below.