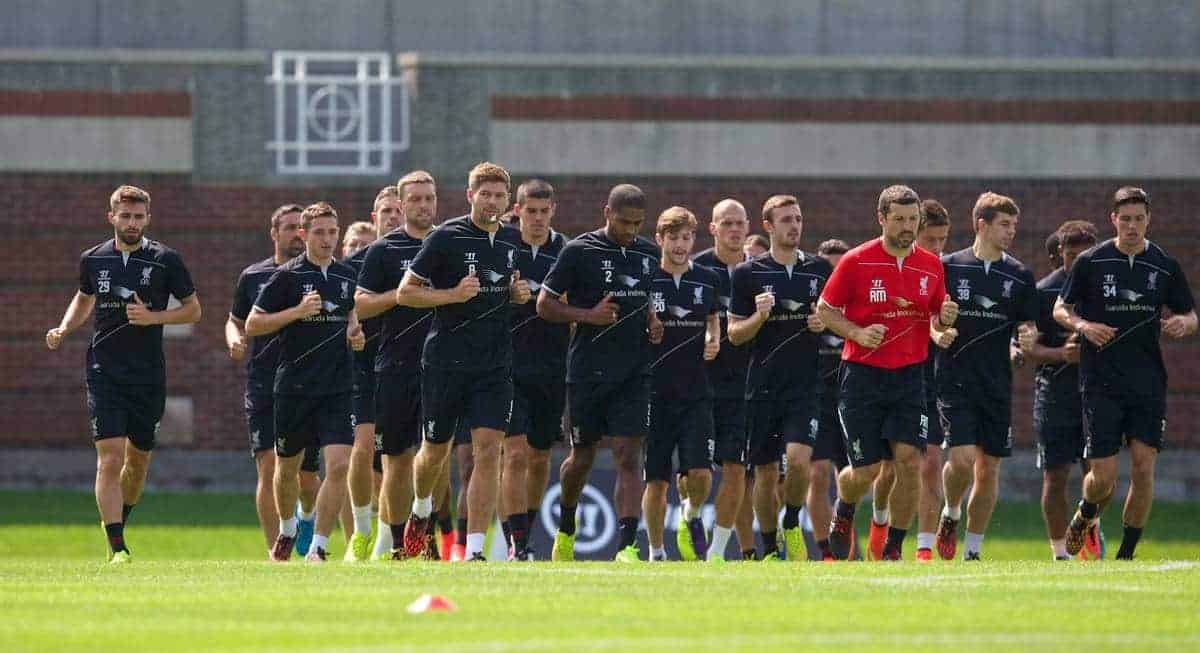 The Reds have arrived in America to play four (possibly five) pre-season fixtures ahead of the 2014/15 campaign. Henry Jackson highlights players, opponents and tactics for Liverpool fans to keep their eye on over the next fortnight.

Next stop, USA! The #LFC squad are ready for the 2014 Tour #LFCTour pic.twitter.com/v1My3Nx6jp

Brendan Rodgers and his Liverpool squad arrived in Boston on Sunday as embark on their pre-season tour of north east America.

The Reds will play four matches in the space of 10 days – against Roma, Olympiakos, Manchester City and AC Milan. There could be a fifth fixture down in Miami should they win their group in the ‘Guinness International Champions Cup’.

With Liverpool’s World Cup players returning for the first time since last season and several new signings also set to make their first appearances in a Reds shirt, it’s sure to be both an exciting few weeks and a great chance for Rodgers to perfect his plans ahead of the new campaign.

Much is expected of Markovic, who joined from Benfica for £19.8m last week.

The 20-year-old has been tipped to become one of Europe’s best players by European scout Tor-Kristian Karlsen, and it will be hugely exciting to see how the Serbia international adjusts to life at Liverpool.

Fast, skilful and creative, Markovic has the chance to endear himself to Reds fans straight away in America. He could feature in the first friendly against Roma in Boston.

Lallana’s arrival at Anfield has not necessarily been met with unanimous positivity due to the hefty £25m fee, but the 26-year-old has the perfect opportunity to win over his doubters over the next couple of weeks.

The former Southampton captain will likely be tested in a number of roles. He’s equally happy in central midfield, out wide or in a ‘number 10’ role.

The battle for a midfield starting berth is extremely strong and Lallana will want to cement his place from the off.

Lallana, and other England stars Gerrard, Sturridge, Johnson, Henderson and Sterling won’t feature in Boston against Roma on Wednesday, their first action will be in Chicago against Olympiakos on Sunday.

The development of Raheem Sterling has been absolutely sensational over the last 12 months, and it looks as though Ibe may be replicating his young teammate.

The 18-year-old has enjoyed an excellent pre-season so far, setting up both goals in the 2-1 win over Preston on Saturday and playing with a confidence and maturity beyond his years.

While some may feel Ibe’s first-team opportunities will be few and far between next season, such is the squad’s depth in attacking areas, Rodgers has shown that he will pick players on merit, regardless of their age.

Roma could potentially be a Champions League opponent of Liverpool’s in the group stages, and their clash in Boston should be an intriguing one.

The Giallorossi enjoyed a terrific season of their own last season, and their surprise second-place finish in Serie A had definite echoes of Liverpool’s 2013/14 Premier League feats about it.

They have proven quality in their ranks, from Daniele De Rossi and Kevin Strootman in midfield, to new signing Ashley Cole and highly-rated Moroccan Mehdi Benatia at the back.

Although pre-season games don’t always prove much, it will still be interesting to see Rodgers’ men compete against a top side.

Last season’s top two do battle in New York on the last day of the month, and it will be compelling to see how Liverpool do against the champions.

City have strengthened their own squad too, bringing in Fernando and Bacary Sagna from Porto and Chelsea, respectively, as they look to dominate English football. There will be other signings to come too.

A strong showing from the Reds will give them belief ahead of the new campaign, even though the result is fairly meaningless in the grand scheme of things.

Rodgers will be tweaking his tactics next season in order to make up for the loss of Luis Suarez.

Rather than sign a player of the Uruguayan’s ilk – there is barely anybody in world football who can match him – the Reds boss is bringing in players who can star in a 4-3-3 system, with Daniel Sturridge as the central striker.

Having started the Preston friendly with a midfield diamond before switching to 4-3-3, it will be interesting to see how often the boss uses each formation across the four games.

The likes of Markovic, Lallana, Sterling, Philippe Coutinho and the incoming Loic Remy will all be expected to fill the void left by Suarez, as well as likely backup striker Rickie Lambert.

This tour is the perfect opportunity for the Northern Irishman to work out his best side, and gain an idea on how best to rotate his squad and keep his players fresh. The addition of Champions League football means rotation is paramount.

While what happens on the pitch is clearly important, the real reason behind Liverpool’s tour is to improve the club as a brand in a country where the popularity of football is increasing at a huge rate.

The likes of Manchester United, Manchester City and Chelsea are all hugely powerful clubs financially, and it is imperative that Liverpool try and stay in touch in that respect. Increasing their fan base in America is something that can definitely aid this.

The club will be holding numerous events in Boston, Chicago, New York and Charlotte; with player appearances, open training and soccer clinics.

This tour should be one huge positive, both in terms of the team’s success and the continued growth of Liverpool Football Club.