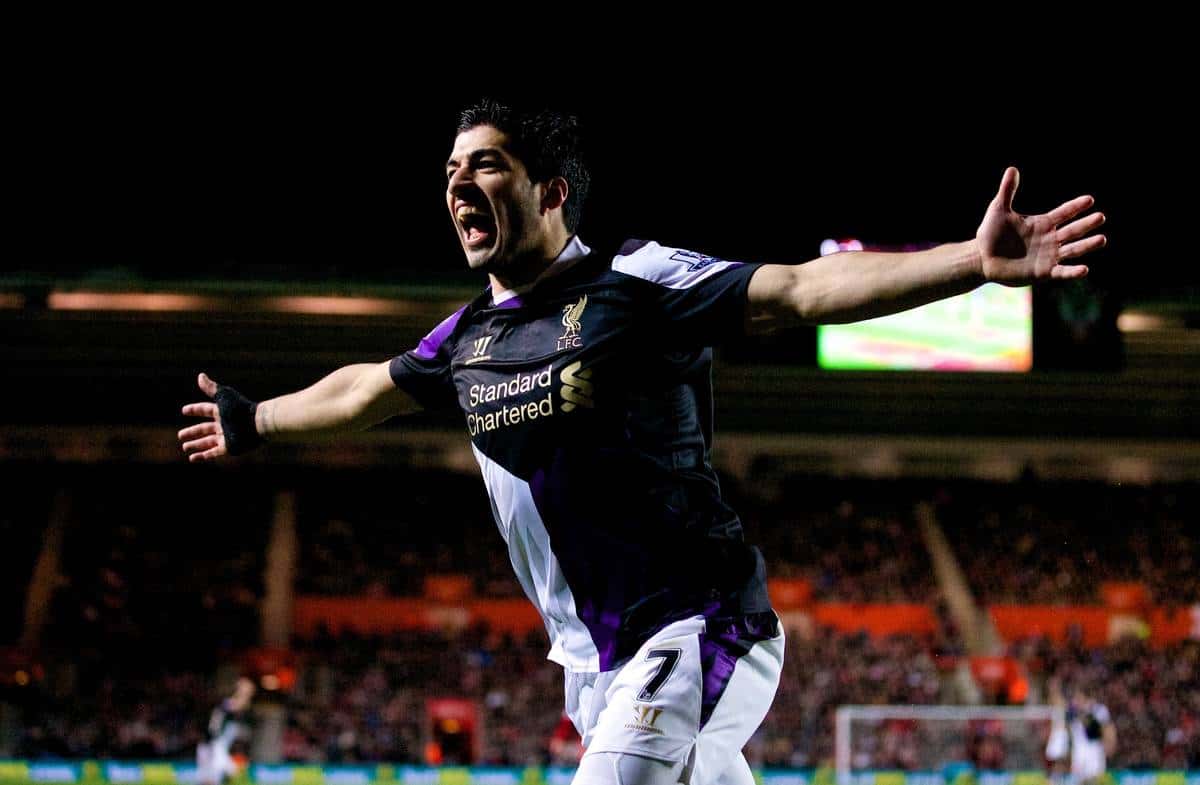 Luis Suarez scored a plethora of incredible goals in a Liverpool shirt. Here, Jack Lusby chooses the 10 greatest Suarez goals for the Reds.

Wedged between fellow substitutes Maxi Rodriguez and Jonjo Shelvey for the majority of the game, Suarez was introduced by manager Kenny Dalglish on 63 minutes, with the Reds 1-0 up following a Raul Meireles strike.

Making up for a now Torres-less Liverpool side, Suarez—who hadn’t trained with the side since his arrival—announced himself in style with a goal on his debut, with Potters defender Andy Wilkinson struggled to keep out the striker’s bundled effort.

The Liverpool No. 7 returned to terrorise Stoke City with an incredible strike in the Reds’ 2-1 Carling Cup Fourth Round victory at the Britannia Stadium.

Receiving the ball out wide, Suarez nutmegged Potters defender Ryan Shotton before perfectly bending the ball around Thomas Sorenson and into the corner of the net from outside the box.

In what is now perhaps the immortal Suarez goal in a Liverpool shirt, the striker made the most of a ricocheted ball and received possession near the halfway line.

Spotting Canaries goalkeeper John Ruddy off his line, the Uruguayan didn’t hesitate to attempt a long-range lobbed effort, and the rest is history.

Equalising for the Reds in what turned out to be a 1-1 draw at Anfield, Suarez took only three touches to score this magnificent effort.

The first saw the Uruguayan take down a hopeful long ball from Jose Enrique with a superb touch on the chest, the second deftly knocking the ball around an onrushing Tim Krul, and finally slotting into the net with consummate ease on his third.

In a wholly unprecedented move, Suarez scored one of the goals of the season in this victory over West Brom.

Perhaps making up for a poorly weighted pass out to the flanks for Aly Cissokho, who sent a hopeful ball back into the fray, Suarez scored an immense header from 18 yards.

Furthering his reputation as the scourge of Norfolk, Suarez hit an incredible volley from 40 yards high and hard, dipping over a hapless Ruddy—a player who is surely glad to see the back of the Uruguayan given their history.

(NOTE: this goal is the third in the video above.)

To complete his hat-trick on the day, Suarez knocked the ball over Leroy Fer and, with a petrified Ryan Bennett backing away further and further, took his opportunity to rifle an exceptional half volley into Ruddy’s net.

The first Liverpool player to score three league hat-tricks against the same club.

There’s a touch of the Hernan Crespo’s about this one: a supremely chipped ball over Hugo Lloris.

Suarez’s goal put the Reds 4-0 up on the day, with a Raheem Sterling goal capping the victory and sealing the fate of then-Spurs manager Andre Villas-Boas; the Uruguayan was instrumental throughout, particular in the absence of captain Steven Gerrard.

(NOTE: this goal is the third in the video above.)

Typically for the Uruguayan, who is perhaps the most uncannily fortunate player to have ever worn the Liverpool shirt, Suarez received the rebound from a Jordon Mutch challenge to continue the attack.

The No. 7 played a great one-two with Jordan Henderson, with the Englishman supplying a sumptuous backheeled return ball, and curled the ball into David Marshall’s bottom corner from outside the 18-yard box.

This effort, accomplished in the return fixture at the Cardiff City Stadium, makes the cut as symbolic of the near-telepathic understanding that Suarez developed with his striker partner Daniel Sturridge last season.

Making the most of a blocked cross, Sturridge backheeled the ball astutely into the path of a well-judged run by Suarez, who blasted the ball past Marshall and into the net.

Which Luis Suarez goal for Liverpool is your favourite? Let us know in the comments below.