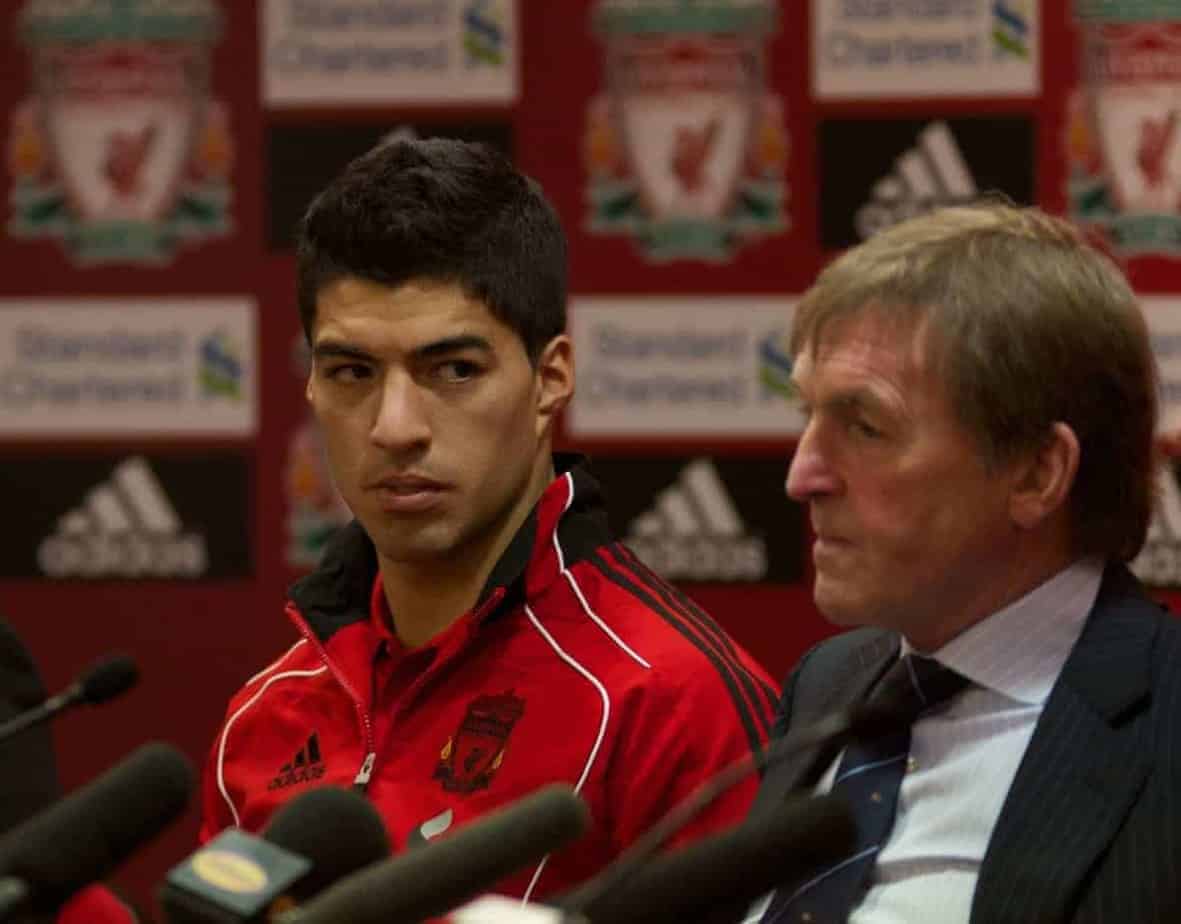 Luis Suarez joins Barcelona for £75 million, bringing an end to three and a half wonderful years at Anfield. Henry Jackson looks back at the highs and lows of Luis Suarez’s unforgettable Liverpool career.

In January 2011, Liverpool’s director of football at the time, Damien Comolli, flew to Holland to seal a deal for highly-rated Ajax striker Luis Suarez. The then 23-year-old was not a global superstar at that time, but his performances at the 2010 World Cup for Uruguay had caught the eye of many.

On the final day of the January transfer window Suarez completed a £22.8m move to Anfield, and was given the famous number seven shirt worn by such legends as Kenny Dalglish and Kevin Keegan. The former was the Liverpool manager at the time of Suarez’s arrival.

Despite El Pistolero‘s undoubted talent, not many Reds fanatics would be prepared for what he would achieve in the next three and a half years.

The Uruguayan made his Liverpool debut as a 63rd-minute substitute at home to Stoke. It took just 16 minutes for him to open his Reds account, rounding goalkeeper Asmir Begovic and rolling his shot agonisingly into the Kop net. It doubled Liverpool’s lead and ensured a 2-0 victory. A star was born.

Although four goals in 13 league appearances didn’t exactly set the world alight during the rest of the 2010/11 campaign, Suarez’s performances helped lift Dalglish’s side from mid-table to sixth in the final Premier League standings.

The 24-year-old enjoyed a superb summer at international level, winning the Player of the Tournament award at the 2011 Copa America as Uruguay triumphed in Argentina.

The 2011/12 season was not a particularly spectacular one for Suarez at Liverpool though, and was one that would be clouded in controversy.

11 goals in 31 league games represented a modest return, but a match-clinching goal in the Merseyside Derby at Goodison Park and a superb hat-trick away to Norwich were two of the highlights of Suarez’s season. He also earned his only piece of silverware in his time at the club, winning the 2012 League Cup after a penalty shootout win over Cardiff in the final at Wembley.

Suarez’s season was marred by an incident involving Manchester United’s Patrice Evra in October 2011, in which he was found guilty of racially abusing the French left-back. He was subsequently banned for eight games. Suarez claimed his innocence, and although criticised by those outside the club, Dalglish and the players stood by their man throughout the whole debacle.

Dalglish was sacked in the summer of 2012, following a disappointing second spell in charge, and was replaced by Swansea boss Brendan Rodgers. Under the Northern Irishman, Suarez enjoyed two outstanding seasons- he signed a new long-term contract in August 2012- seeing him become one of the finest players in world football in the process.

A stunning free-kick against Manchester City in the early weeks of the season gave Liverpool supporters a taste of what was to come, and another hat-trick at Norwich saw his wonderful form continue.

By March 2013 he had amassed 20 league goals, becoming only the third Reds player to achieve such a feat after Robbie Fowler and Fernando Torres.

Suarez’s wonderful displays were deservedly rewarded with him being nominated for the prestigious PFA Players’ Player of the Year award, although he eventually lost out to Tottenham’s Gareth Bale. Sadly, however, his season was once again somewhat overshadowed by controversy.

On April 21st 2013, Suarez bit Chelsea’s Branislav Ivanovic in the 2-2 draw at Anfield, culminating in a 10-game ban from the FA. It meant he would miss the opening six games of the 2013/14 campaign.

It was a hugely disappointing end to a season that had seen Suarez bring so much joy to Reds fans around the world.

During the summer of 2013 Suarez signalled his intention to leave Liverpool, citing the British media and wanting to play Champions League football as the main reasons for his decision. Oddly, he then seemed keen on a move to Arsenal, whose embarrassing £40,000,001 bid for him- his buyout clause was reportedly £40m- was rejected by the club.

On the eve of the new season, after a period that had seen Suarez consigned to train away from the first-team by Rodgers as punishment for his behaviour, he reversed his decision and pledged his allegiance to Liverpool. His final season at the club was to be one of the finest ever by a Reds player.

He returned from his suspension in late September, in a League Cup tie against United, and was truly mesmerising from that point on. He scored twice on his Premier League return, a 3-1 win at Sunderland, while his first game back at Anfield saw him find the net in a victory over Crystal Palace.

A treble against West Brom, two more against Fulham and a trademark free-kick in a 3-3 draw at Everton saw Suarez’s unstoppable form continue, and better was still to come when Norwich visited Anfield.

The Uruguayan scored four goals against the Canaries, including two Goal of the Season contenders, leaving many running out of superlatives for him. Some were even calling him the best player on the planet, ahead of Lionel Messi and Cristiano Ronaldo.

The relationship between Suarez and Daniel Sturridge in attack, dubbed the ‘SAS’, was not only inspiring Liverpool towards a top-four finish, but also an unlikely title bid. They would end the campaign with 52 league goals between them.

Further majestic performances against Spurs, Cardiff and Stoke saw Suarez continue to entertain the watching world into the New Year, and although his performances dipped very slightly at times during the remaining few months of the season, he went one better than the previous year and won both the PFA Players’ Player of the Year and FWA Footballer of the Year awards.

31 goals in 33 matches was a staggering return, particularly considering he didn’t take penalties, and although Liverpool had to settle for second place after an agonising last few weeks of the season, both the team and Suarez, in particular, were lauded by the fans.

At the 2014 World Cup, Suarez found himself at the centre of another biting scandal. His attack on Italy’s Giorgio Chiellini in Uruguay’s 1-0 win over the Azzurri resulted in a four-month ban from all football.

It was third time he had done such a thing during his career, and it left his Anfield future very much up in the air.

With the club clearly feeling they couldn’t keep standing by their man, and Suarez keen on a move, the 27-year-old will sign for Barcelona in the next few days. There were claims by some that the deal would have happened regardless of the biting incident.

Losing Suarez is undoubtedly a massive blow to the club- letting a play of his staggering ability will hurt any side- but every club moves on.

The money received will hopefully be well spent, and another title challenge in 2014/15 could be just around the corner again.

The controversial striker has given us many wonderful memories since signing in January 2011, and is arguably the most talented player ever to wear a Liverpool shirt. The sky is the limit for Luis Suarez.

What is your favourite Luis Suarez memory? Let us know in the comments section.