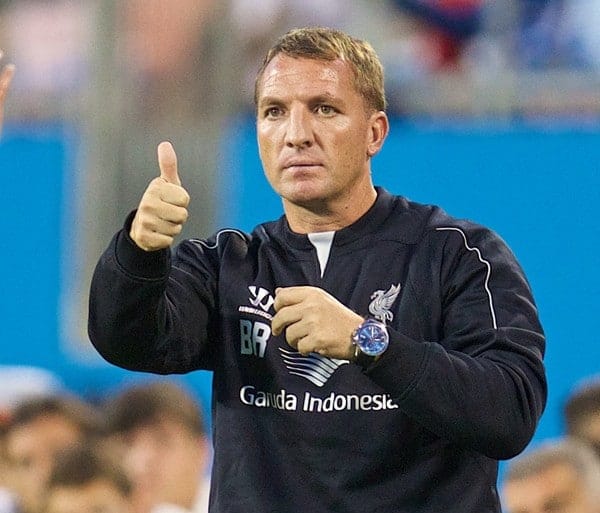 Liverpool players will arrive back on Merseyside on Tuesday following their tour of the USA with manager Brendan Rodgers taking all the positives from the pre-season campaign.

The Reds have just one friendly remaining before the Premier League gets underway on Sunday, August 17th. They host Bundesliga runners-up Borussia Dortmund at Anfield this Sunday, 10th August.

Liverpool tour of the USA was more an exercise in commercial growth in the American market for the club’s brand, but Rodgers was only interested in the progress of his players.

Despite ending the tour in a 3-1 defeat to Manchester United on Monday night, Rodgers believes his players are in a good place to start the season.

“I thought it was a really good game and both teams have had a very good workout out here,” Rodgers told press after the game.

“I thought we were well worth the lead and had a couple more chances to increase that and it looked like maybe we should have had another penalty.

“We conceded a disappointing equaliser and then very quickly conceded another one so the game started to get stretched a bit, but overall I’m delighted with the whole tournament and what it’s done for us.

“We have worked very hard and we will leave here with plenty of positives and look forward to the new season.

Had the best experience a fan could have asked for!!! Thanks @LFC and @LFCUSA for making everything possible!!!! #YNWA

“The condition of the players that we have at the moment is very good. We’ve obviously got a few missing but certainly by Southampton we will be ready and we are looking forward to it.”

Prior to Monday night, Liverpool had lost to Roma 1-0 in Boston, beaten Olympiacos 1-0 in Chicago, beaten Manchester City on penalties after a 2-2 draw in New York and overcome AC Milan 2-0 in Charlotte.