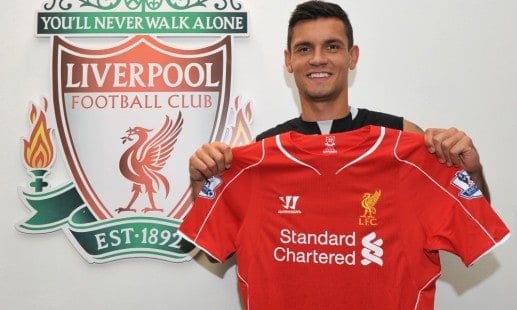 Recent signing Dejan Lovren was left frustrated last week as he was unable to travel to America to join up with his new Liverpool team mates. Although the Croatian defender was evidently disappointed at not obtaining his visa, it did not stop the 25-year-old speaking highly of his new club. In recent interviews about his £20 million move, the new number 6 has already put a smile on the faces of the Liverpool faithful.

In his first interview with the club, Lovren said: “It’s a dream come true, I am glad to be here. I am proud, and of course my family are proud and I can’t wait to start.”

The Liverpool new boy was also keen to ensure the fans he will give his all: “I am a player who will give 100% and I want to show the crowd, because they deserve to see players who will give it all. I know it is something special to play in front of them at Anfield.”

As well as speaking about the history of the club, Lovren was keen to show supporters that he was picking up the Scouse lingo already. In a recent Twitter Q and A, the defender answered to one question from a supporter with ‘haha nice one’.

If Lovren’s interviews were not enough evidence, his ecstasy was plain to see in the clubs official photographs. These photographs included him penning his five-year deal and what now seems to be the obligatory ‘lean against anything in sight’ pose at Melwood.

In the countless of signings made by the club, it would be hard to find another player as happy as Lovren was to sign his long-term contract – well, Rickie Lamber aside. With a smile as wide as the Mersey, it was clear for all that Liverpool’s fifth summer signing was desperate to come to the club and needed no convincing.

The fact that Lovren needed no convincing is yet another sign that Liverpool has signed a player who wants to play and fight for the club. With today’s market and money in football, fan’s can easily be drawn into a false sense of security with new signings. After so many signings it is hard to believe the clichés used left, right and centre in their first interview with their new club.

The versatile defender’s first goal for Southampton was one to forget for Liverpool fans. In a game that the Reds could not break down the Saints defence, Southampton’s number 5 coolly headed home the winner for the visitors. In a stand out performance, Lovren’s solid, yet sometimes erratic defending, managed to keep arguably the league’s best attack quiet.

Although Liverpool endured a memorable 2013/2014 season, their defensive errors proved costly come May. With Lovren’s capture, Liverpool may just have the defensive leader they were crying out for last season.

Calm, collective and a strong presence on the ball, the former Lyon man could be the answer to Liverpool’s leaking, flapping defence. And with backing of Liverpool legend Jamie Carragher, Liverpool fans will be hoping that Lovren will follow in the footsteps of the Liverpool legend.