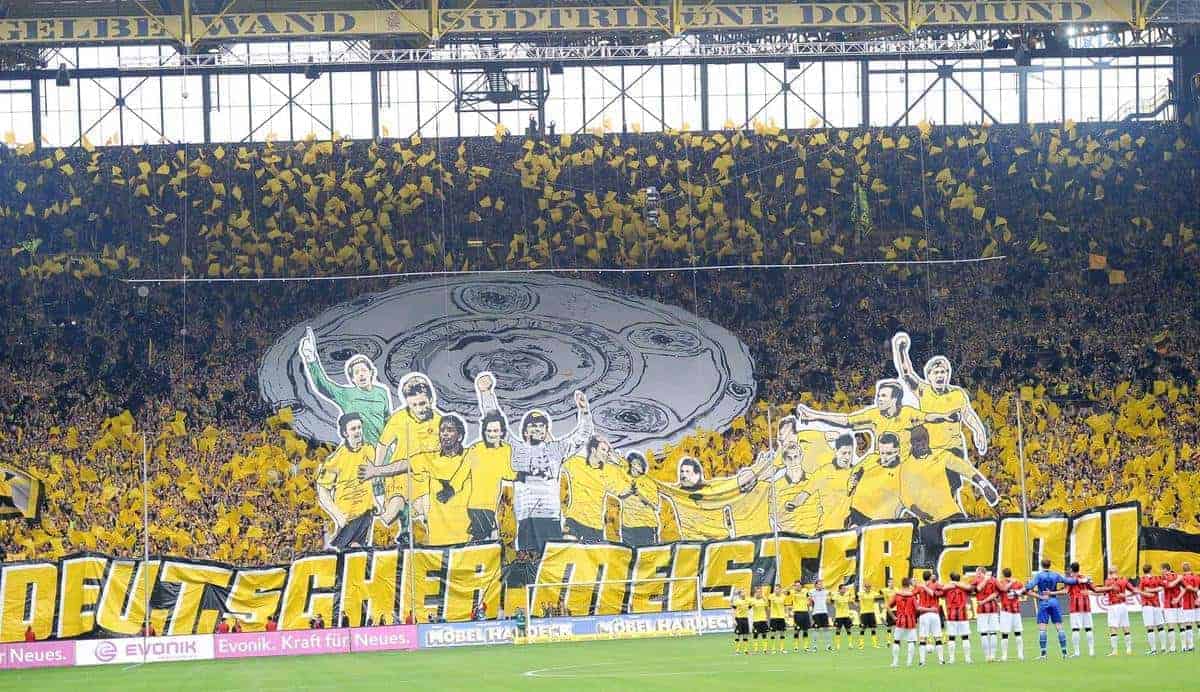 Liverpool take on Borussia Dortmund at Anfield this Sunday in what is their final pre season game before kicking off the new season a week later at home to Southampton.

Andy Yates spoke to Manoj, editor of Dortmund fanzine, Schwatzgelb, ahead of an encounter which has excited many since its announcement earlier on in the summer.

1. Are you looking forward to Borussia Dortmund playing Liverpool for the first time since 2001?

I am really looking forward to this match. The last time Borussia Dortmund visited Anfield I missed the trip. Although it is only a friendly, this time I will travel to Liverpool to see one of the holy grails of football. While I do not have a second club I fell in love with, I still have a soft spot for Liverpool. Back then of course because of their rich tradition (and trophies) but nowadays also in respect of their alternative way compared to turbo-capitalism clubs like Manchester City FC, Chelsea FC and so on.

2. What kind of side should we expect to see Jurgen Klopp play at Anfield?

We are in the middle of the preseason preparation. Dortmund are still missing 4 German national players. So I guess especially Hummels, Großkreutz and Durm won’t play. Weidenfeller might start in goal, Piszczek as right-back, Subotic and Sokratis in central defence and Schmelzer as leftback. In holding midfield Sahin will miss the match due to injury, the same goes for longtime injury Gündogan. So Bender might start along with Kehl or Jojic. German national Matthius Ginter is another option on this position. If we play a 4-2-3-1, like most of the time during last season, Blaszczykowski will start on the right wing, Mkhitaryan in central midfield and Aubameyang on the left side. The new Italian signing, Ciro Immobile would then be our sole striker. I we play 4-4-2 Adrian Ramos will probably be our second striker while Blaszczkowski or Aubameyang might drop out.

3. Dortmund always have a good number of young players coming through the academy, who should we look out for both on August 10th and the season coming?

During the last season we really had many hyper-talented youth players making their way into the starting line-up and even further – like Mario Götze, a Dortmund breed. At the moment regarding the youth players Under-19 Euro champion Jeremy Dudziak, an attacking midfielder, is a guy to look out for. However he hasn’t impacted on Jürgen Klopp’s squad just yet. Regarding
talented players, who aren’t youth players anymore, we have central defender Marian Sarr (19), of course new signing Matthias Ginter (20), midfielder Milos Jojic (22) and right wing Jonas Hofmann (22).

4. Liverpool and BVB could well draw each other in this seasons Champions League. What are fans travelling to the Signal Iduna going to experience when they arrive?

Dortmund have a long tradition of giving a warm welcome to supporters from all over the world. There is nothing better than going to Westfalenstadion (as most supporters still call it) a couple of hours prior to the match, having some beers in a pub or at a mobile bar/grill station. Doing some football small talk, taking pictures, making friends.

5. Like Liverpool, over the years you have lost top players to clubs with more financial power, the most recent being Robert Lewandowski. How will this effect Dortmund’s season?

Lewandowski leaving is a big hit for our attack. He is pure quality and the complete package. While it will be difficult to replace him with the same kind of player, there is also a chance for Borussia Dortmund. Other players will get more shares in our attacks and will have the
chance to score more often than perhaps at times last season. So maybe all of our attackers might fill the gap a bit.

And of course there is new Italian signing Ciro Immobile. We shouldn’t expect a scoring sheet like Lewandwoski, but he will make his way in Dortmund even if he needs some matches or months to adapt to German football.

6. How popular are Liverpool over in Germany? They have quite the history vs German teams, the most memorable being the 1977 European Cup Final vs Borussia Monchengladbach.

I cannot seriously answer this question as I don’t know how many supporters each of the English clubs have in Germany. From my perception clubs like Manchester United FC, Arsenal FC and Liverpool FC are regarded as the biggest real names in English football even if that is
nowadays a little bit turned upside down by clubs like Manchester City and Chelsea.

7. BVB are hugely popular in Britain, and often compared to Liverpool in terms of style of play. How proud are you with how far you have come since your financial issues a few years ago?

The time from 2008 until today is really like a dream. About 10 years ago we thought this club might vanish. Only a couple of years later we won back-to-back Bundesliga titles, including a double, plus we reached the Champions League final in Wembley (another holy grail) in 2013.

8. Jurgen Klopp has played a huge part in your success. Just how good of a manager is he?

Looking at the complete package I haven’t experienced a better manager in Dortmund since I began watching football. There might be manager who has the same coaching talent, but Klopp is also a motivator, a very good PR-manager and knows how to transform talents into stars. Together with sporting director Michael Zorc and CEO Hans-Joachim Watzke we have a superb team.

9. Marco Reus has been linked with a number of clubs, including Liverpool. How sad would you be to see him leave, should he chose to depart from BVB?

Marco Reus is a special player. Ultra fast with highspeed dribbles you very often can only interrupt by a foul. Combined with his excellent technique and powerful shot, he is a deadly weapon. There is a big chance that he might leave Dortmund next year. Clubs like FC Barcelona,
Real Madrid CF, FC Bayern Munich and Manchester United are chasing him.

It will be really difficult to make him stay, especially as he has a buy-out clause worth 35 million Euro, that can be activated next summer. On the other hand Marco Reus is a Dortmund-born player and in Dortmund he has the chance to become a legend. And yes, of course Reus leaving Dortmund would make me really sad.

10. What are your seasons expectations? Bayern Munich have strengthened their side further, will the gap in points further too?

Bayern Munich are again absolute favourites to win the title. But I don’t see them winning with a gap as large as the last two seasons.

Regarding Borussia Dortmund’s visit to Anfield Road I am not really sure how that will end. My guess would be 2-2 plus some beer for me and my friends travelling along with me from Berlin to Liverpool!

Thanks to Manoj for taking the time to answer our questions.